The Cross and the Rainbow 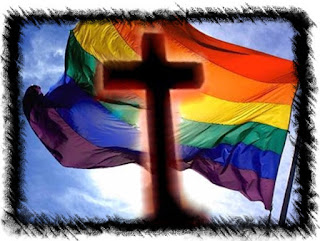 The rainbow is a global symbol for LGBTQ (Lesbian, Gay, Bisexual, Transgender, Queer) movements. Your Facebook feed has seen many people rainbow-ise their profile pics to celebrate the USA’s 5-4 Supreme Court decision granting couples of the same gender legal status as a married pair.

The rainbow flag - representing the LGBT movement - originated in San Francisco in 1978 and was designed by artist Gilbert Baker. There are two suggested reasons for the choice of the rainbow as a symbol. The first is Dorothy. Remember the Wizard of Oz? Remember Dorothy singing ‘Somewhere over the Rainbow’? Dorothy was played by actress Judy Garland who grew up to be a gay icon. It is thought, by some, that the symbol was a shout-out to her.

The other suggested reason is that the colours reflect the diversity of the LGBTQ movement. Personally, I’ve never thought that reason made much sense (see this post) but it is a reason many LGBTQ people profess. Today the rainbow is globally recognised as a symbol of gay expression. It the chief symbol of a pagan sexuality for an age that is regressing back to its old Western roots of pagan spirituality.

Few people will use those exact words. But the rainbow is - in short - a symbol of Queer Love.

But that is not the only meaning this symbol possesses. Long before the parade in San Francisco, the rainbow was understood to be a unique symbol for how God relates to humanity.

Thanks to Russell Crow, most people have a vague idea of who Noah was - even if they’ve only come across the rather confused Hollywood version of it. Noah was the guy who saved himself and a few others by fearing God’s judgement enough to build an arc (a giant boat that doesn’t actually ‘go’ anywhere - it just floats). He built the arc to escape a global natural disaster in the form of a flood that was God’s punishment on a grossly wicked humanity.

The rainbow first appears after the flood. Genesis chapter nine records God speaking to Noah:
When I bring clouds over the earth and the bow is seen in the clouds,
I will remember my covenant that is between me and you
and every living creature of all flesh.
And the waters shall never again
become a flood to destroy all flesh.

The bow is the symbol of God’s promise to never again bring down his judgment on all humanity as he did with the big deluge. It’s as if God - after going to battle against all the evil in the world – returns as a victorious warrior and hangs his war-bow up for a rest. The flood did its work - for a time. But evil will come back and good will once again – of moral necessity - have to stand in judgment over it.

But rainbows do not point down at the earth, do they? They point up. They point into the very heart of heaven. And the next time the full judgement of God is fired, that is where it lands: on the Heart of Heaven himself.

And that symbol that target is the cross.

The cross is where God takes his bow out of the clouds, pulls it back to full strength and rains down the arrows of justice on himself. Justice has been served.  But the judge extends love and by punishing himself - not the guilty perpetrators. At the cross, justice and mercy kiss. The rainbow – like the cross – is a symbol for human forgiveness for those who would embrace the new dawn of redeemed spirituality.