What is 'Emotional Cheating'? 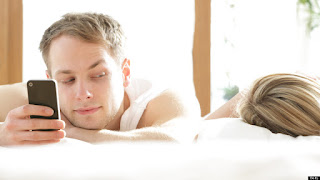 “Yes, your thoughts betray you.
Your feelings for your friends are strong. Especially for… sister.”

'The wife saw her husband talking with that girl at the back of the church. She had seen them converse after services many times before - he would often laugh at her jokes and she at his. They were clearly enjoying each other’s company. She knew what was going on: this was an “emotional affair”. She knew it was an “emotional affair” because the various women’s journals she had been reading described in detail how such things work. This clearly checked all the boxes.

'She approached the pair and began to beat them both.

'The church offered to pay for the counseling. They were too embarrassed to go back. The friendship was destroyed. The marriage was scarred.

'What happened? Had this couple been secretly sleeping together? Had the man laid plans to leave his wife and run of with this other woman? Was she trying to seduce him?

'No. They had merely been developing a friendship. But the many articles that the wife had read about “emotional adultery” fed her already fearful personality. They gave her a lens through which to view certain social interactions moving her from feeling merely insecure to feeling utterly betrayed.

What’s in a Term?

'“Emotional adultery” and "Emotional cheating" are new terms that you may hear whenever mixed friendships are being warned against. The term is now a popular one - but it is harmful and misleading. The above story may be dramatic - but it's sadly true. Even sadder, it is representative of many such incidents in the UK, USA and other parts of the modern world.

'There are now many books, periodicals and blogs which deal with the phenomenon. Usually these articles warn about the possibilities of anyone being able to easily commit emotional adultery in the workplace, a chat room or even at church. At times, checklists are given to help one know if they are committing “emotional adultery” because it is far less obvious than committing adultery in the traditional sense.

'Often heart-breaking stories are recounted as a warning about getting “too close”.  These stories, which can found by Googling the term “emotional adultery”, are many.  Often they are written by a spouse who feels slighted and unloved by their partner who seems more interested in a new inter-gender relationship than in them. These stories describe a very real occurrence that have left many people hurt and we would be foolish to give too hasty a critique to the warnings about “emotional adultery” in the face of such devastation.

'And yet - in the name of preventing “emotional adultery” - many have also been hurt. Accusations and innuendoes have been made and simple warm conversations have been eyed with suspicion if not outright aggression.  Marriages and dating relationships have been hurt when a mixed friendship has hastily been interpreted through the lens of “emotional adultery”. Brother-sister bonds have been shattered when one of the pair is pulled aside and warned that they are on the verge of disaster and that they need to “end it”. Motivated by guilt and shame more than wise conviction they quit the friendship - leaving the other feeling confused and abandoned.

'In order to obey the New Testament command to “test all things” we must proceed to ask some honest questions. Is this new term a fair replacement for words like 'covetousness', 'jealousy' and 'lust' - words that described destructive sins. Or, is this term misleading, fill us with unnecessary suspicion and set us up to mistrust any meaningful relationship that crosses the gender divide? What does the Bible say?'

To read about healthy friendships between Men and Women check out Forbidden Friendships available on Amazon in Paperback and Kindle in the USA and the UK
Email Post
Labels: adultery can men and women be just friends emotional affair emotional cheating emotional infidelity fear insecurity jealousy lover mistress sex