Rael and his GoTopless Day - Some Sane Thoughts 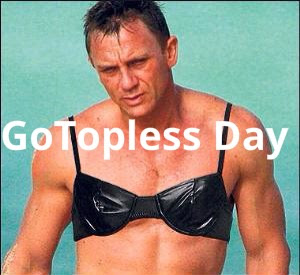 Next month, 19th May 2018, is set to be the eleventh international Go-Topless Day. Though organisers have tried to make it global, it is still mostly just American cities that celebrate it.

It involves parades where women march topless and men wear bikini tops or bras. The event was started in 2007 by a funny (and false) prophet named ‘Rael’ who started a UFO religion. I was asked for a Biblical response to the event. So, I have racked my brains trying to bust out some ideas... I have two thoughts.

First of all, try to find them as they may, the moralists won’t find exact modesty codes in the Bible. Nowhere does it say how much make-up a woman should or shouldn’t wear, how long a skirt should be or what is proper bathing attire in mixed company. We do not have strict rules here so let’s not add to God’s word by inventing some and thus bring a curse on ourselves (Rev. 22).

Let me flesh this out.

A few years back, a psych student proved that what male students thought of as ‘sexy’ changed with the seasons. She would have male students rate various images on a computer screen according to how sexy they thought each was. What she found was that in the winter - when the female students were well covered - it didn’t take much for a male student to find an image ‘sexy’. But in the spring and summer time - when they were surrounded by females who were much less covered – it took considerably more for the man to notice and rate an image as sexy.

So, for the love of God and of sex, I do not wish Rael and his topless crew well in their quest to get women to walk around topless all the time. Sure, it would be exciting for a day or two, but the novelty would wear off soon and what has traditionally been kept for the bedroom would no longer be as exciting. While not trying to erase feminine beauty from the public square – aka the Islamic burka - let’s keep a few things a surprise for the marriage bed – surprise does serve to enhance, not detract, from erotica.
_______________