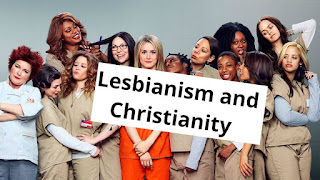 Girl-on-girl is the new cool and the world is uglier for it.

Now God cares for lesbians and bisexual women - just like he has compassion on all that he has made. Unfortunately, the LGBT* ideological juggernaut – backed by corporate America – is blaring its sirens so loudly that it is hard for alternative voices to present their views to these ladies.

This celebration of lesbianism is new. Some of the ancient civilisations were as gay you could get. The Greeks, the Romans, the Canaanites, etc. all practised male homo-sex with great panache (and with a generous dose of paedophilia thrown in). Gay sex is neither new nor progressive. Celebrating sodomy would be far older than Ian McKellen even if he was as old as Gandalf. But lesbianism is different. The old world is rife with the poetry of gay males, but very little is written on lesbianism. One of the few references come from none other than the Apostle Paul who writes in Romans one,

They exchanged the truth about God for a lie and worshipped and served the creature rather than the Creator, who is blessed for ever. For this reason God gave them up to dishonourable passions - their women exchanged natural relations for those that are contrary to nature.

Biblically, lesbianism – like different types of sins that we all deal with - is a phenomena that is a result of our brokenness as a race and proof that we are creatures far from our Creator. But today lesbianism has its PR people working overtime to give it an appeal that is far from the reality usually experienced. What can a Christian do in such a world?

Guys – take a stand against this trend. The entertainment industry appeals to our baser lusts in an effort to promote the image of a bisexual woman as being real femininity. Don’t agree with it. Not with your words or with what you allow yourself to be entertained by. It would do your spiritual sisters good to know that you – as a man – reject this popular image. It does not reflect the true beauty you are looking for in a potential mate. Do so respectfully towards individuals - reach out in love and friendship to lesbians and bisexuals you may know - but be firm in rejection of the ideology.

Ladies – know that you are under the influence of a lot of social engineering. Under the Victorian era the lie that ‘true women should never enjoy sex’ was pervasive. Now, over a century later, we have swung to the other extreme and over 100 million copies of 50 Shaded mommy porn were sold in the USA alone. Neither the Victorian prude nor the modern bisexual fornicator reflect the sexually healthy and happy Shulamite girl enjoying her lover in the Song of Songs. A bisexual image is being held up to you as the path to deep and exciting femininity. It’s a mirage.

Christians – there are some among us who struggle with SSA (same-sex attraction). Particularly, there are women who either find themselves sexually attracted to just women or to people of both genders. This is usually through little or no fault of their own and they often feel ashamed for having desires that are beyond their control. As Christians, we need to be sensitive and create safe environments for our people (especially the young) to share these struggles. We all fight against various sinful urges. As that great theologian from the 1980's - Michael Jackson - so profoundly said, 'I'm bad!'. And as such, we all need to have safe friends we can confess to without judgement.

There are Christian resources if this an issue for you or a friend:

The Heart of Female Same Sex Attraction (in the UK) by Janelle Hallman is written by a counsellor and former practicing lesbian. She has helped many women deal with the roots of SSA. It's very personal and takes you on an exploratory journey of your own desires and attempts to bring them to the feet of Christ. Many women described not only experience a change of behaviour, but also of desire.

No Stones: Women Redeemed from Sexual Addiction is also for Christian women but deals with sexual struggles of all types in a way that helps lift the black cloud of shame and leads to transformation in Christ.

Can you be Gay and Christian?(UK) by Dr. Michael Brown is a book that answers its title for both gay and lesbians and those who simply want to know. It is written with a lot of compassion and clear concern for truth. I have short blog post dealing with the question here.

There is also the book Spiritual Friendship by Wesley Hill that you may want to explore. He is a celibate Christian man whose same-sex desires have not changed or lessened in his years for faithful service to Christ. (As opposed to the many women who have felt change of not only behaviour but also desire as described in the first book I listed).

Lastly there is my book Forbidden Friendships (UK) that touches on how close friendships can help people who deal with SSA and other sexual struggles.

If you have any questions, please feel free to email me at menandwomenfriends@gmail.com. All correspondence is treated with strict confidentiality.
________________