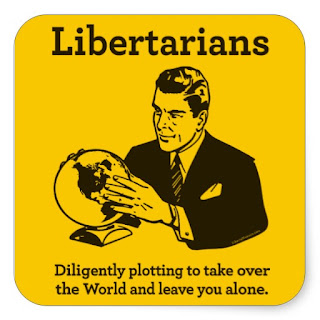 Recently the West has seen a resurgence in Libertarian politics. We should be happy for this. But we need to be happy in a qualified way. Even the term means different things to different people and while Libertarian principles can be rooted in a godly worldview, it can also be rooted in an ungodly one.

By Libertarianism, we’re meaning a political system focused on the liberty of the individual from the State. People who identify this way aren’t so concerned about the Right/Left political divide as much as the Big/Small government divide.

Here in the UK we can see a form Libertarianism in the Green party who would make marijuana and brothels legal – a matter of individual conscience. We also see it another form in the Welsh national party that wants to dissolve central powers away from Westminster into more regional zones. While the Tories are mostly NOT Libertarian – certainly not Theresa May who wants the right to read your WhatsApp messages – there are some voices within the party, such as Daniel Hannan, who are. In the USA, Rand Paul would be similar to Hannan – a lone Republican voice calling his party and country to Libertarian principles.

Christians should rightly be wary of big, intrusive government. We should do so based on our knowledge of human nature as corrupted by sin. Historically they tend to erode religious liberty. Even in the secular world, we are familiar with the phrase “power corrupts, absolute power corrupts absolutely.” It’s this understanding of man’s sinful nature that made the difference between the American and the French revolutions, both of which happened around the same time, but which had very different results.

There is a type of Libertarianism that sees man as essentially good, but he is oppressed by some sort of abstract system called "government". But there is another type of Libertarianism that sees man as broken because of sin. Because of this condition, political power should be spread out as widely as possible – hence America’s separation of federal powers, balance between federal and state’s authority, written Bill of Rights, etc. 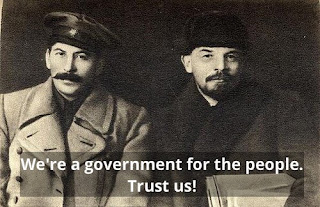 The difference between the Revolutionary French vision of Liberty and the Colonial American vision of Liberty was that one didn’t take sin seriously and the other did. Once freed from the Monarchy, the French were shocked to find that sin and evil were still with them. For, to the ungodly, Liberty can simply be code for “I can do whatever I want.”

For those of us who embrace Libertarian ideals, let's remember Satan’s words to the fallen angels in Milton’s Paradise Lost when they finally arrive in hell, "Here at least we shall be free!”

Why we need [some] Government

This is also why the Christian view is not compatible with the forms of Libertarianism that are akin to anarchy.

Some Libertarians think that mankind needs government like a fish needs a bicycle. If you’d like to read a Christian advocating anarchy, see HERE.  I don’t think this article is entirely wrong – but it’s unbalanced in its exposition of Scripture. He cites some verses but leaves out some others. If we look at the full counsel of what Scripture says on the matter, we see the Bible creates a tension when it comes to its view on government. It’s is neither naïve in embracing it nor is it completely dismissive of it.

God’s Kingdom will ultimately subvert every government that does not confess Jesus as Lord – and Christians, as citizens of heaven, should resist ungodly laws. But until Christ’s Kingdom comes in power, there must be some government because here is still human sin which tends towards lawlessness. The church is called by God to preach the gospel and care for the poor. Civil governments are called by God to wield the sword in order to protect the innocent and punish evildoers. Read what Paul writes carefully…

The one in authority is God’s servant for your good. But if you do wrong, be afraid, for rulers do not bear the sword for no reason. They are God’s servants, agents of wrath to bring punishment on the wrongdoer. Therefore, it is necessary to submit to the authorities.
–Romans 13.4

All leaders will give an account to God for how they governed (Psalm 2). It will be a scary day for many of them as they’ll have to give an account of what they did with the authority entrusted to them. Though this should strike fear in the hearts of leaders – it should also remind us that all authority, including civil authority, comes from God and should not be despised outright.

Nearly ten years ago, a Western coalition of nations took out Saddam Hussein in a cloud of talk about liberating the Iraqi people. And for good reason - he was an oppressive and brutal tyrant. But what happened when he was removed? The anarchy that ensued was worse than the dictator. Honour and revenge killings, looting, rape, etc. No police were around to protect the innocent.

This world's ultimate problem is a not a politico failing, but rather a cardio failing. Bad men in good systems will still create painful living. So though we can't agree that Libertarianism will solve all of the world's ills, we may rightly agree that they will protect us from the abuse of overreaching government.

And we still need some government in place to protect us from the abuse of our overreaching neighbours.
Email Post
Labels: #taxationistheft christian libertarians libertariansim