Round Three: Letters to my Atheist Youth Leader 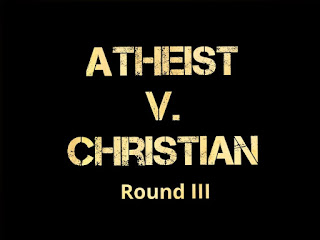 Hey, Rich. Thank you for your post (here). I was glad to see that we share a mutual appreciation of the metric system – a trait not shared by all our native countrymen. I was also glad to see that your response also touched on the subject of human value and meaning.

These are weird notions for big clumps of cells like us to possess. As a Christian, I can give warrant for why I believe in value and meaning. But I'm curious how you - in your material Universe filled with atoms but void of fairies and deities - still hold to these notions.

For example, musing on what is of real value you ask,

Think of Doctors Without Borders perhaps. These people literally give their lives to what they do. Is the reduction of suffering and the increase in happiness of these people of value?

The answer is no it isn’t.

In your pure materialist Universe, there is no more value in one blob of protoplasm flying from England to Uzbekistan to alleviate a subjective experience called pain than there is any of the chemical reactions exploding right now in the sulphuric atmosphere of Venus. None. There is nothing inherently valuable or meaningful in it. And no science experiment is remotely capable of proving otherwise.

It is only sentimentality (a curious misfiring phenomena of the evolutionary process) that gives us the bizarre sensation that there is anything called ‘value’ in the first place. You concede that in the end, no life will be left and all will be forgotten. But you insist there is a temporal meaning,

Any reduction of suffering in this Universe has intrinsic value regardless of the end state – for those people were able to lead happier lives while they existed.

Intrinsic value? Who confers this? Other humans? What if they are my enemies – and I value seeing them suffer to satisfy my sense of justice? Then an increase of suffering is valuable... to me.

Perhaps this illusion of meaningfulness once aided some of our ancestors in their quest for food. But in our scientific age, we are free to dismiss such a notion. ‘Value’ is not a material term and cannot be quantified in any empirical way. And, as you wrote to me in your first post,

Should I build my lens for viewing the universe on anything that doesn’t have material and therefore absolutely provable existence?  For me, the answer is a resounding no.

Is there a scientific experiment we can do that proves one piece of matter is inherently more valuable than another? What experiment proves that I am inherently worth more than helium gas?

If I can’t prove it via the scientific method or direct observation then I have to rely on faith.

Believing that anything has inherent value is an act of faith. But, if we are to be consistent in our philosophical materialism, we must dispose of things that cannot be empirically verified. Things like value.

Your assessment of human value and meaning is certainly different from that of 19th and 20th Century atheists. Nietzsche, Sartre, Russell, etc. were all resolute that life is meaningless and therefore of no objective value. The 21st Century ‘New Atheists’ are more optimistic. Like you, Richard Dawkins argues that we can still find value and meaning in the face of death. Some of your words reminded me of what he wrote in the beginning of his book, ‘Unweaving the Rainbow’,

We are going to die, and that makes us the lucky ones. Most people are never going to die because they are never going to be born. The potential people who could have been here in my place but who will in fact never see the light of day outnumber the sand grains of Arabia… We privileged few, who won the lottery of birth against all odds… the vast majority have never stirred?

The reasoning here is clear: we should be thankful that we get to exist for a limited time as opposed to not existing at all.

But this argument raises questions that don't give comfortable answers. Why do we need to compare ourselves to theoretical, ‘potential people’ to feel this contentment? In order for Dawkins statement to carry its persuasive force, our imaginations need to bestow personhood on those who have never been conceived.

We must also ask if the argument that Dawkins presents satisfies the human soul. Some may feel that since we exist, we now know what will be taken from us. We must suffer the knowledge of losing everything.

If we were to take a cynical approach, we could argue that it is easy for a healthy, famous millionaire like Dawkins to feel content in this life. But what of the billions who live in poverty or those who suffer violence or chronic pain? What about those for whom death is an escape from an existence of torment?

The Teacher in Ecclesiastes takes the opposite position. He points to the difficult lives in a material Universe (‘under the sun’),

I saw the tears of the oppressed – and they have no comforter. Power was on the side of their oppressors… the dead are happier than the living. But better than both is the one who has never been born. (Ec.4.)

You almost acknowledge that in the long term there is no value, saying ‘Please don’t mix up the value of the end state with the value of the now.’ I grant that atheists can live lives with a sense of meaning. But what sort of value is this if we have to keep our thoughts only on the present? Wouldn’t it be wonderful if some force from beyond the sun were to reach into time and lift your head up so that you could look with joy at the horizon as well as your feet?

Why Ought I be Moral?

You neatly respond to my question, ‘Why should I be moral?’ with a double-barrelled reply.

1. Because it makes us feel good – and

2. Because without moral behaviour society would collapse.

This response reminds me of soup at a questionable restaurant – best left unstirred. Because if we do, we find that a host of mystery ingredients float to the top.

You say that we ought to be moral because it makes us feel good. Well, yes. Certainly, good deeds can stroke our pride and make us feel like ‘one of the good guys’. Pride is an organ that can be stroked from many directions. But aren’t there many immoral actions that cause a sense of pleasure as well?

I don't know how it is in Aylett, Virginia, but here in London, many people go out on a Friday night to be happy. And moralism is not the strategy of most to do it. If acting immoral can also make me happy – as I know it can – why ought I to be moral instead of immoral?

And as for the other half of your response, why should I care about the stability of society? If I feel society has screwed me over, I may delight in getting justice on the system by wreaking some havoc.

Let’s do a thought experiment. Let’s say you visit a fellow atheist on his death bed. He has succeeded in life in the sense that he has been surrounded by likeable people, had exciting relationships, made lots of money, etc. But he has done so at the price of oppressing many people. There’s blood on his hands. As you talk to him he chuckles and in good Sinatra fashion says, ‘Well, I did it my way… got away with it too. Life’s been good to me.’

In that circumstance, what could you possibly say to him to convince him he should not have lived the way he did? Some immoral people die happy. Some moral ones die in grief.

You speak of ‘inherent’ morality. But inherent does not mean authoritative. My body has lots of inherent impulses. Not all of them are what most of us would call ‘moral’.

This whole argument is based on the questionable sand of atheistic evolution. You write,

When we stir this, we have three unsavoury issues rise to the surface.

First, when some of our evolutionary cousins eat their own children or when a male forces sex on a female, is this morally wrong? Can animals be immoral? You argue for a universal moral metric stick. But given the evolutionary process, how? Was there a definite moment in history when the organic motions we call cannibalism and rape became ‘wrong’?

Secondly, if altruism evolves, what does this mean for people who do not share our moral metre stick? What about the Khans? Did they act that way because they lived 900 years ago and evolution had not advanced their altruism enough yet? Are we morally superior because 900 years has biologically advanced us? What about ISIS? They do similar things to the Khans. Are they genetically inferior to you and me? If our species is to advance, should we get rid of these altruistic retards?

But then, if morality comes from our evolution, why berate immoral people? Why do you give the ancient Israelis and their primitive genetics such a hard time? You might as well call salmon to repent for not having legs.

Lastly, if altruism has developed to where it is now just in order to help our species survive, we should expect it to change in the future. What if our hard wiring changes so that we see evil as what we now see as good – and vice versa? Birth rates in the West are low. Perhaps our hardwiring will change in order to increase our offspring. It may have us do things to our women that we now consider unethical so that they will have more babies. What if ISIS and their sex slavery, instead of being backwards, is really the next step in the evolutionary process to replenish the species and make a stronger race?

If morality evolved, then that means morality changes – and your eternal moral metre stick is a concept foreign to the material universe you live in. The current morals of homo sapiens are just a stopover on the road to something else. No use in getting too attached to them.

Unless we live in Universe that is more than just material…
_________________
Please Share
See Round One
Email Post
Labels: does morality evolve ecclesiates and purpose evolutionary morality richard dawkins atheism what is the meaning of life