Prayer that Raises the Dead 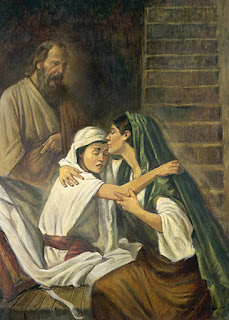 'And he stretched himself upon the child three times, and cried unto the Lord… and the LORD heard the voice of Elijah.'

We often say our prayers. But do we really pray?

Those who will be broken in prayer are the ones who break hellish fortresses.

Elijah was dealt an unexpected blow. The blessing of friendship he enjoyed with this woman and her son was attacked by a deathly spectre. The young mother that Elijah had blessed was now facing an unspeakable curse: the death of her little boy.

But Elijah knows a God who can redeem the worst of tragedies. But this redemption is not brought down on the careless wings of half-hearted praying. He doesn’t merely look at the boy, shrug his shoulders and say ‘Well if it’s your will, God…’.

He takes the dead boy and brings him into his own bed. He makes this personal.

He stretches himself out upon the boy. He identifies with him. He takes this boy’s death as if it were his very own.

He does it three times. He persists. His faith will not be turned away by a lack of answer the first two times. Three times he stretches himself out in crying out for life.

His voice is heard. God sends life back into the boy. Do we pray just to pray? Is it a mere personal exercise – a form of meditation? Or do we pray in order to be heard?

Not only is the boy raised to life, the mother finds a new life for herself, one that cannot be taken away from her. Elijah had built a relationship with a woman who did not share his faith. He had blessed her with bread and she was grateful. But it was in seeing her boy raised that she came to personal faith.

Churches do many activities that the wider community benefits from. Christians have started countless soup kitchens, hospitals, and orphanages during the last 2,000 years. We’ve done so much of it, that society now expects it.

Feeding the poor gives moral validation to the message of a God who generously and freely gives to those who are spiritually poor. This will soften some hearts. It makes some people appreciative and can give us a hearing. But charity programs are not one of the ‘signs that shall follow those that believe.’ They are not in the sense Jesus meant when he uttered those words. We can do such things without an ounce of supernatural help.

We need people who can pray God's life into a perishing generation. Such prayer comes from long hours spent alone with God as well as a willingness to take risk. It’s not cultivated by praying with one eye on heaven and the other checking how many likes our last social media post got. It comes when we learn to pray specific prayers for real crises in real space and real time.
________________
(Please Share)

Can Christians have best friends of the opposite sex? Check out Forbidden Friendships - available on Amazon in Paperback and Kindle in the USA and the UK.