Ahab: Profile of a Beta-King 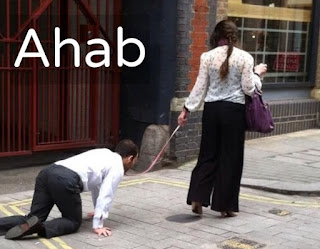 ‘Ahab did more of what Yahweh considered to be evil than anyone before him.’ -1Kg 16

Ahab. Before we can really talk about Elijah, we must present our wayward King. Ahab is the 8th King of Israel since the nation broke away from Judah after the passing of King Solomon. He is the son of Omri, a military general who led a coup to take the throne. Omri and the six Kings before him passed in quick succession, giving Israel a rocky 58 years of initial leadership. Ahab will reign for 22 years, providing a measure stability for Israel.

But this political stability costs a great deal. For Ahab drinks down more perversity than all the previous Israeli Kings combined. A toxic culture has grown under his kingship that exceeds anything his apostate forefathers knew. It poisons everything. Darkness becomes the new normal.

How does Ahab create this spiritual swamp? To start with, Ahab promotes Baal worship into Israel. It has become all the rage among the who’s who. His predecessor King Jeroboam’s bull worship seems to have been just a warm-up for the spiritual cancer that is Baalism. It infects the land like an aggressive virus, twisting the hearts and minds of the people away from the God of their forefathers: Abraham, Isaac, and Jacob.

Our sinful sovereign also permits the worship of Asherah, Baal’s female cohort. Worshipping this goddess and teaching her doctrines pumps petrol into an already sexually immoral furnace. Asherah is hailed as the enlightened Morning Star of Ancient Near Eastern mythology. But underneath her veneer of sophisticated education, Asherah worship is merely an excuse to get naked and worship idols.

Finally, there is the woman. Ahab is the first King since the ugly breakup with Judah to take a princess wife from a foreign, pagan king―an act forbidden by Scripture. We don’t know why he got hitched to Princess Jezebel. Perhaps his successful father, King Omri, had arranged it. Perhaps he wedded her for the sake of political stability and economic opportunity with their seafaring and prosperous Phoenician neighbour. Domestically some commentators still remark that it was a great move. Having her as Queen is an asset both politically and economically. Or perhaps Ahab married her because he thought she was pretty hot. You know, those Phoenician gals and stuff.

But whatever practical reasons may have influenced the decision, she is spiritually and morally whoreable. She drives the fake religion that entices Israel to prostitute itself with other gods. Ahab occupies himself with politics and the military well enough, but he abdicates his role as Defender of the Faith to someone who seeks to suffocate it entirely. She is the one who entices these rebellious Israelis to come even deeper under the cloud of Yahweh’s righteous anger. Ahab may wear the crown, but Jezebel always seeks to wear the trousers. The King is not a man of strong spiritual conviction and is therefore easily blown about by emotional and sexual winds―a trait Jezebel can easily manipulate to suit her purposes.

Ahab is ultimately culpable for this whole mess of course. He allows it on his watch. He fails to give godly leadership to both his Kingdom and his wife. Jezebel may be the active one but, as Pontius Pilate will learn centuries later, a leader cannot cleanse his hands of blood nor delegate culpability.

God does give him time to repent. God loves Ahab. He loves him enough to send him a mighty prophet to try to turn his heart. Men, you will shape the culture of your generation and the foundation of the generations to come. But how will you do so? The way you worship God matters. How you exercise self-control over your sexual and other appetites matter. If you allow lechery to live in you, it will be like a parasite that demands you feed it every day. You will be a slave to lust as Ahab was to Jezebel.

If you do marry, the woman whom you choose to take matters. We are not islands. Choices that we think of as being private are the ones that shape our character. Even our laziness and passivity has an effect on those around us. By contrast, the battles we fight in private for personal godliness prepare us to bring something of value to the public sphere.

Our King makes bad choices in his personal life and his name will be forever carved on the stones of history for leading Israel into the foulest apostacy. He fails to worship the Creator God in his prayer closet and so falters in leading the nation righteously. This all happens because he allows himself to be ruled by seduction rather than conviction.
What will future generations say of us? Will we be seen as sons of Ahab?
_________________