Hermeneutics: How do we understand Vashti? 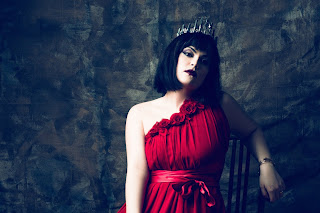 WHAT SHOULD WE make of Vashti? The King calls her to appear and she refuses. Is she brave and heroic? Or, is she just being proud and stubborn? What you or I might think of the whole situation is of limited importance. The question we must ask is: how did the author of Esther understand Vashti?

Two Sides
No matter how thinly you slice your bread, there is always going to be two sides. In the same way, the account of Xerxes’ divorce with Vashti currently has two views. If we are going to be careful readers of the Bible, we need to exercise our minds to determine which understanding of the events is most likely. This is not easy as the details on Vashti are sparse and there is debate among some scholars as to whether she existed or is just a fictitious plot device to set up the story.
Now, most Bible teachers agree that Xerxes’ request probably wasn’t well thought out or timed given his having drunk too much. But some teachers go beyond this and argue that Vashti was a brave martyr for the cause of women everywhere because of her refusal to obey the king’s request. They believe that Xerxes was really calling Vashti out to the party only to humiliate or objectify her in a way that was contrary to her otherwise upright character. Some even see Xerxes’ request to come out wearing the crown to mean wearing only the crown (meaning to come out naked). Her refusal is therefore seen as something noble and exemplary.
Mike Cosper expresses this view in his book, Faith Among the Faithless. He writes, ‘She heard the throb of the music, the roar of the mob. And tonight, Vashti would say no. For her dignity. For the dignity of her handmaidens. For the women of Persia, Vashti would say no.’
Others, of which I am one, agree that Xerxes was a terrible husband, but also think that the Biblical authors want us to see Vashti as being just as proud and unexemplary as Xerxes. Why do we think so?

Too Far Between the Lines?
First of all, we need to carefully see what words are and what words are not in the Bible. We need more details in the Biblical text itself before we should be prepared to grant Vashti some sort of martyr status for all Persian women. The author simply doesn’t use hero or victim language to describe her. Also, contrary to the imaginations of more than one commentator, there is nothing in the actual words of Scripture to indicate that Xerxes wanted her to come out naked or to do a striptease. Had the author wanted to convey that this was the king’s request this, there were many words available to him to describe it but he didn’t use any such words.
Also, based on how Xerxes treats Haman when he approaches Esther too closely in chapter seven, it would seem that the author wants us to see Xerxes as the type of guy who likes to keep his women for himself. The author simply says that the king requested Vashti’s presence so that everyone could see her beauty and that he wanted her to wear a special crown. The writer of Esther simply never describes Xerxes request as sexually immoral nor does he affirm Vashti’s refusal of the king’s command as something noble. Some may argue that you have to 'read between the lines to see it.' Well, yeah, deep between the line!

Greek Historians
Secondly, though there is not complete confidence in Vashti’s historical identification, many connect her with Queen Amastri, Xerxes first wife, someone who the Greeks viewed as being proud and cruel. One historian recorded that once, when Amastri felt threatened by a potential rival, she sent guards to find the woman’s mother and had her breasts cut off and fed to the dogs. If this Queen is Vashti, then it’s most likely that she was banished to the harem whee she continued to wield a degree of influence if it is to be syncretised with secular sources.

Jewish Historians
Third, a lot of ancient Jewish Midrash also understands her as being wicked and corrupt like her husband, especially from those rabbis in nearby Babylon at the time. In this sense, their view is similar to the Greeks. The Midrash understands her to be a very proud woman as her father was also a king and she saw her husband as failing to live up to her father’s greatness. Admittedly this is not a universal view among ancient rabbis as some Midrash from back in Israel saw her in a more positive light. 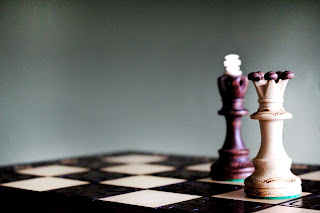 Political Dynamics
The fourth reason many are slow to read simple heroism into Vashti is due to the politics involved. For many, this conflict is more about power than sex. Vashti was born with royal blood and her marriage to Xerxes helped merge two dynasties and, though Xerxes was the kingdom, his was also seen to be a family of upstarts. That she was holding a separate party, one that didn’t involve commoners like Xerxes’, may have had as much to do with class signalling as it did gender respectabilities. In short, politics makes it all more complicated.

Mixed Company in Ancient Persia
The fifth issue concerns women in public life at the time. We need to question whether Vashti’s public presence would have been scandalous. Now, traditionally, this had been frowned upon and the sexes had always partied separately. By the time of Xerxes, however, things were changing. The role and activity of women wasn’t what it had been 100 years previous. Whether one wants to view that as progress or as decadence, or as some mixture of both, is up to the reader. The high-class Persian women of this period were becoming more powerful and more socially engaged. There was a school for wealthy girls in Susa and seeing women learning horseback riding, archery, or economics wasn’t unusual at this time. Joshua J. Mark writes in his entry in the Ancient History Encyclopedia about this epoch that,
Women could own land, conduct business, received equal pay, could travel freely on their own, and in the case of royal women, hold their own council meetings on policy… women had more rights and responsibilities [in the Achaemenid Empire] than in any other ancient civilization except that of Egypt.
He further writes of this era that Queens in particular, ‘were given places of honour at banquets alongside distinguished male guests.’
How the culture would have viewed the appropriateness of Xerxes’ request to come to a garden party where commoners were present is speculation. But saying, as some Bible commentators have, that Vashti was fully justified in her refusal of the king’s command because wives or queens were never to be seen at public banquets doesn’t seem to line up with the historical consensus for this era. 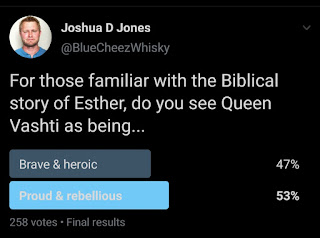 Obey the King?
Sixth, it’s important for us to keep in mind that King Xerxes asking his queen to come to the banquet may have been somewhat different than a husband who has had a bit too much to drink might making inconvenient requests of his wife today. The author understood that Xerxes was seen as the god-king of Persia whose every word was to be taken as divine revelation if the whole Empire were not to fall apart. To the author, this is not an episode of the Simpsons where it’s fine to poke fun at the clueless dad and husband. That is a modern invention.
The author understood, if not shared himself, that, when a Persian Emperor speaks, it is a command that was expected to be taken with the utmost gravitas. It is less like Marge ignoring Homer and more like the Prime Minister refusing to come to Buckingham Palace when the Queen summons him. Only this monarch has real authority. The author would not have seen this as a mere domestic spat. He would have understood this as a political crisis.
And...Narrative
Lastly, it seems that, based on the narrative flow of the book, Queen Vashti is set up by the author to be a contrast to Queen Esther. Esther is a book of contrasts. The pagan party at the beginning contrasts with the godly celebration of Purim at the end. Haman and his ambition contrast with Mordecai and his mission. Vashti contrasts with Esther. Vashti proudly refuses to come when she’s asked. Esther humbly comes when she’s not. One is banished. The other is exalted. This why John Robertson, in his commentary on Esther, writes ‘The book of Esther would make no sense if the king’s request for Vashti to come before him was vulgar or depraved. Esther honoured Ahasuerus and Vashti dishonoured him before his guests.’
Looking at all the evidence, we find it unlikely that the author of Esther wanted us to understand Vashti as a great moral example. The lack of textual affirmation, the historical context, and the flow of the story mostly point to the author intending her, along with Haman, to being the bad examples meant to contrast Esther and Mordecai’s good examples.