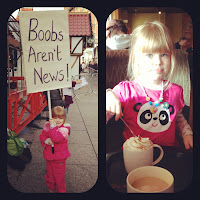 The afternoon was an interesting cocktail of chivalry, feminism and biblical patriarchy.  I had planed to my daughter out on a special tea date which we do from time to time.  That morning I got an email announcing a protest that was being organised against page 3 of The Sun (soft-core pornography in a widely distributed newspaper to those of you outside the UK).

We had a lovely date.  I had an Earl Grey while Naomi had a small hot chocolate with whipped cream.  It was lovely and she got her fill of love and attention.

Then it was off to the protest.  Turn out was smaller than your average Mormon family.  Less than 8 people with signs...not very good ones either, but ones with a clear message.  Naomi (5 years old) was by far the youngest and me...well, I was the only one there with a penis.

“What are we doing papa?” asked Naomi

"We're holding a sign that says 'Boobs aren't News!' sweetie."  I say holding back a chuckle.

“Because I love you Papa.”

“Do you think that girls should give kisses to boys who don’t love them?”

“What if a boy didn’t love you but offered to give you money, would you give him a kiss then?”

“Great! (relieved) Glad to hear that sweetie.  Pornography is a little bit like that.  Girls give something special to boys who don’t love them for money.  God hates that and it hurts both men and women.  We should pray for these girls Naomi, because most of them didn't have good papas who loved them and took them out on dates.”

Any minister who can’t explain his theology to a five year is a charlatan and should be defrocked :)