The Worst Sin I Ever Committed 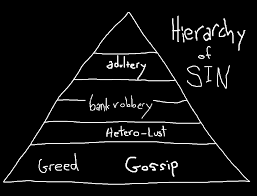 As I look through the rear-view mirror of my life, I see the good and the bad.  I can focus on all the undeserved blessings for which I can be thankful for: for friends and family and material goods.  I can see personal successes where I have either achieved something exceptional or I have been used to bless and impact a life.  But in addition to these positive things, I am also aware of sin and how tragically it has impacted my life.  Though I have experienced the amazing joy of having my sins forgiven by God through Jesus, nevertheless the consequences of those sins have made an impact which affects me to this day.  Looking back I ask myself, “What is the worst sin I, Joshua Jones, have ever committed?”

Let’s start with the “juicy” ones some of you (unfortunately) are perhaps a little too curious about.   Is the worst sin I’ve ever committed the first time I ever looked at something pornographic?  Well, I really regret that, more than I can say actually, and the thirst for a pure, lust free soul is something that may not ever be fully satiated this side of eternity.  Allowing sexual lust in my life is a sin I deeply regret.  But it is not my worst sin.

Is my worst sin the first time ever I felt attracted to a woman other than my wife (after I got married)?  I was shocked when that happened.  Perhaps I was naïve and thought once I was married under God those thoughts or feelings would never come again.  I’ve never acted on those feelings so it’s not technically a sin, but it shows the weakness of my humanity in a way that can make me feel ashamed nonetheless.  Sad, but not the worst thing about me.

Was it the time I was seven years old and I yelled at my three year old little brother for stealing from me?  I yelled at him to the point that he cried…only to find out later he didn’t do it.   Yeah, I felt pretty evil there.  Still bothers me when I think of it today, but it’s not the worst sin I’ve ever committed.

Was it my cowardice?  Was it those times I failed to speak out the truth for fear of rocking the boat or offending others?  At times as a leader and preacher I have failed to do so.  I wish I had been bolder in speaking the truth in my former job as a leader in St.Nic’s church in Nottingham.  Cowardice is an underestimated evil… but it’s not my worst sin.

Was it the time I lied to someone close to me?  I was ashamed and didn’t want to be caught.  Though I rarely ever tell a direct lie nowadays, I am bothered how in certain situations I can be “selective with the truth” in order to cover my tracks.  I’m not always as honest as I should be.  This is a terrible thing… but still not the worst.

So, what is the worst sin I’ve ever committed?  Well, according to the Bible it’s a sin I have committed almost (if not every) day of my life.   Jesus said that the greatest commandment was to Love God with all of your heart, mind, soul and strength.   Jesus was not introducing something new at this point.  He was actually quoting from Moses in Deuteronomy chapter six.  The greatest sin one can commitment is breaking the greatest commandment: failing to love and treasure God for who He is.  This is what Eve did when she chose the fruit over God.  This is what you and I do with much of our lives and it is the root of all our other evils.  This is reflected in the Ten Commandments.  The first one is that we should have no other gods before the one Creator God.  I think of my tendency to value created things over my Creator and I realise that sin is my worst.  At times in the Bible this is called “idolatry”.  It is the perverse fountainhead which gives birth to all the other brokenness and secondary sins which flow from it.   If I loved and treasured God more than I did in my past, I would not have done some of those other stupid things as a result.

I do love God today and that love does keep me from evil.  I also know, however, that I don’t love God to the degree that He is worthy of and only eternity will reveal how much that lack of love caused me to fail in other areas related to my morality and how I treat my fellow man.

But this can all be spiritual claptrap which sounds impossible for all but the spiritual Jedi unless we know just how much God loves us.  While you and I still hated God, He loved us.  When you and I were giving Him the finger and doing whatever the hell we wanted in rebellion to Him, He was laying plans to come to earth in poverty and seek to save us even to the point of being tortured and killed.  Occasionally someone might risk their life for a dear friend or a noble person, but God shows us how great His love for us is by hanging on a tree for us while we were at our worst.

If we accept that love, we’ll begin to find it filling up our own lives and soon we’ll find ourselves treasuring God far more than we ever thought possible… because He first treasured us.
Email Post
Labels: blaspheme committed love God sin worst