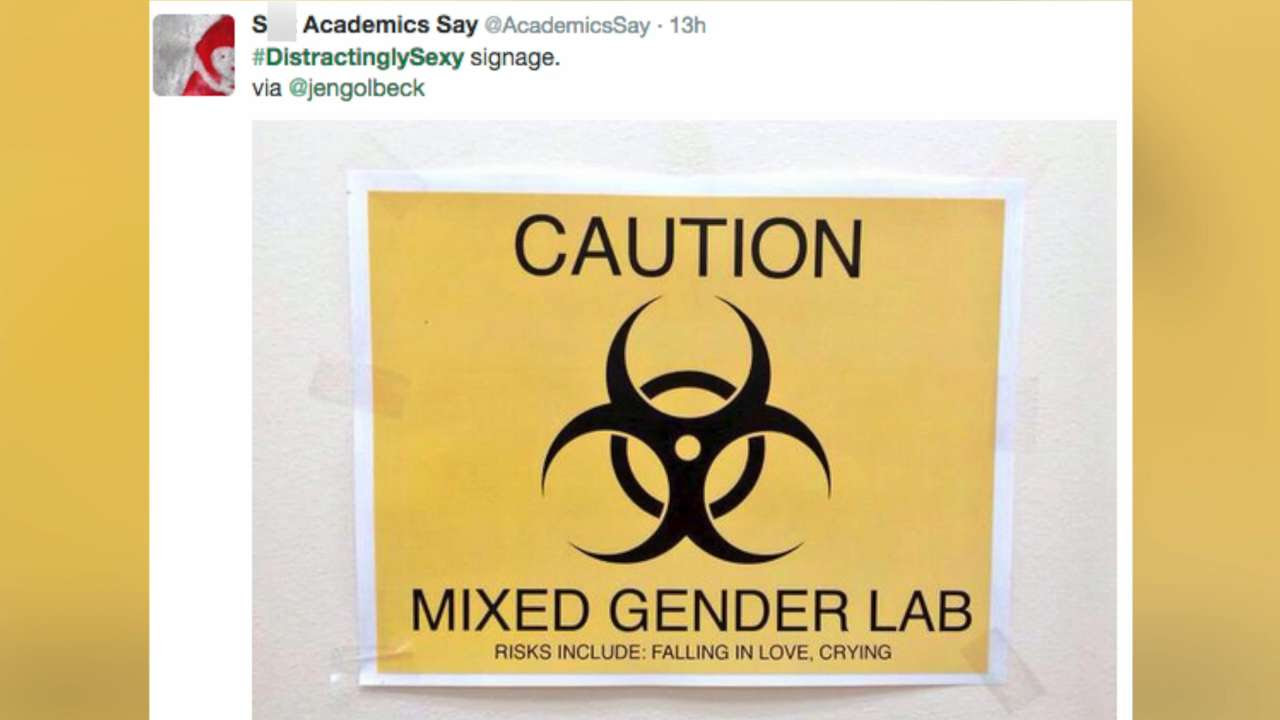 When news is slow, the internet needs something to buzz about. This week it has been over the “sexist” comments made by Nobel Prize-winning scientist Sir Tim Hunt. He said at a conference, "Three things happen when [women] are in the lab, you fall in love with them, they fall in love with you, and when you criticise them, they cry."

Mix the girls with the boys and inevitably they develop crushes (Distracting!) and the girls inevitably lose control over their tear ducts (Help! What do we do now?)  Best to keep them segregated.

After all, we ARE trying to do the work of science here.

Safe to say that Sir Tim probably regretted saying those words out loud about 3 seconds after they hopped from his mouth. The inevitable backlash has resulted in female scientists posting pictures of themselves online wearing decidedly unsexy lab outfits with the hashtag “#distractinglysexy”.

Now, I have about as much experience doing lab work as I do in being a woman. I, therefore, can only speculate what it is about these dens of passion that releases cupid’s arrows above and beyond the normal working environment. If I were foolhardy enough to make a guess, I would assume that a florist or chocolate factory might be more suited to romance than a place of sterile counters and Bunsen burners. But I only speculate. Such matters are beyond me.

Though few men other than scientists would lack the social savoir-faire to actually say those words out loud (at a conference table no less) I know such words have been thought by many. One place these ideas grow is within the church. “Keep the men and women separate” it is presumed, “the church has had enough scandals and we don’t need any more bad PR. Keeping them separate will ensure they behave themselves.”

Gender segregation has been the strategy within some Evangelical circles to keep up appearances and to pursue holiness. Take, for example, this part of a social policy from one Baptist college in Florida.

Elsewhere the social policy describes how men and women need a chaperone if they are to have a conversation together. Now, most Evangelicals are not quite so extreme as to insist on gender segregated elevators and stairways, but the same underlying logic is there. Historically such gender segregation has been more at home under the banner of Islam than within the Family of Christ.

The Bible calls us to love one another deeply from the heart and to carry each other’s burdens. We are to rejoice when they rejoice and shed tears when they mourn. The Bible calls believers to deep spiritual friendships and there is no gender sub-clause to these commands. If we filled the gender divide with love instead of empty space, there would be less room for lust.

Tim Hunt wasn't fully off his rocker in thinking what he thought. Crossing the gender divide isn’t always easy. Outside of the tools which the gospel affords, it can be well-nigh impossible. There can be challenges of elephantine proportions. As sinful humans, it can get messy on occasion. This is a divide, however, that the gospel calls us to cross, “nor is there male and female, for you are all one in Christ Jesus.” (Galatians 3)

Many in this world don’t believe that men and women can have a true friendship. They believe that “the sex part always gets in the way”* As Christians we are to take up the call to show the world around us that, through Jesus’ work on the Cross, we can be more than “just friends”. We can be family. Brother and sisters, fathers and mothers, sons and daughters in the Family of God.

If you liked this, please check out my book Forbidden Friendships in Kindle or paperback at Amazon USA or Amazon UK