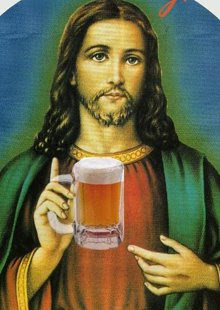 Yeah… I grew up in one of those churches.

Until the age of twenty, alcohol had never transgressed the boundary of my virgin-martini lips. Try as he might have done, ol’ Lucifer never managed to get me to imbibe his lethal liquors at any point during my youth. ‘Spirits’ I believed with zealous conviction, ‘were for those who did not have “The Spirit”.’

Then, at the ripe old age of twenty, I moved to Europe. There, I attended a Bible conference brimming with spirit filled, Bible-loving, Christian leaders.

It wasn’t what my home church had called ‘wine’ when we would celebrate communion on a Sunday morning. It wasn’t the sweet juice I had drunk as a child at the breakfast table along with my Lucky Charms. This was the type of wanton wine that had alcohol it. And among Christians no less! Surely there must have been a mistake. In a godless land like Europe, perhaps a demon-possessed man had switched the alcohol-free Christian wine for Pan’s poison when no one was looking all in hopes of getting us drunk and bringing down the curse of the Almighty upon us.

So I tried to warn them.

‘Don’t drink the wine. Someone’s put alcohol in it!’

That evening was rather a steep learning curve. Not only did I realise that everyone was well aware of what was in the wine, but those Christians actually preferred it that way. I told them, just in case the pastors were unaware, that the New Testament taught drunkenness to be a sin. It turned out they knew about that verse. I asked them why they bothered to drink at all if drunkenness was a sin. They smiled and replied,‘Gluttony is a sin. Food is not.’

That is when the penny dropped and mighty was its dropping. I revisited every verse in the Bible dealing with wine, beer and spirits. I had been wrong. God’s word didn’t teach what I had thought it did about alcohol. I was shaken, not stirred.

It turns out that wine is one of God’s gift’s to mankind. Wine was originally developed by Noah (yeah, the old guy with an arc). In Genesis five, his father, Lamech, prophesied over his son that he would give the people something that would help them rest at the end of a hard day’s labour. Noah then discovers wine in Genesis nine (and soon afterwards discovers the dangers of what happens when one drinks too much!)

Throughout the Bible, having good wine is seen as a sign of God’s favour. ‘God loves you and will bless your … wine.’ (Deut 7.13). It is a blessing spoken over others, ‘May God bring forth food from the Earth and wine to gladden the heart of man.’(Psalm 104). When wine is ‘diluted with water’, it is seen as a godless sign of hypocrisy (Isaiah 1.22). It should be drunk full strength. God himself even ‘drank’ alcohol as beer and wine were to be offered up to him daily at his altar in Jerusalem.

When the Son of God steps out of Heaven and comes to earth, the main difference noted between his ministry and that of John the Baptist was that Jesus and his disciples were drinking wine (Luke 7.34) In fact, his first miracle was instantly turning water into wine for a party and he did so in large ‘religious purity’ pots. Scripture says he did all this to show his glory. Finally, one of the last actions of Jesus, before his death, was to make the drinking of wine a continual symbol of his saving work.

For over 1,000 years, Christian ministers were Europe’s exclusive brewers. Martin Luther, the German who was used to kick start the Protestant Reformation, married a renegade nun who was a brew mistress and, according to him, brewed the best beer he had ever tasted. (A great quality in case you are looking for a wife.)

Not until the mid-19th Century did some Christians begin to adopt the idea of being teetotal. They were more liberal branches of Christianity who did so in the name of social action as a means of helping the poor. They organised, lobbied and in the end wasted a lot of time and money.

The Bible celebrates wine, but it does also give us warnings. It warns us not to drink too much (Eph. 5.18). It does tell us to obey the law, so we shouldn’t drink if we’re under age. We also shouldn’t drink in front of others who might be offended, such as recovering alcoholics. We should also not make drinking a point of argument and division. Like all of God’s good gifts - food, sex, etc. - it can be abused and become a source of pain.