The Death of Sex 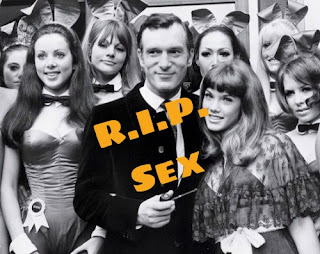 Today - Tuesday the 13th - Playboy magazine announced to the lecherous masses that it is planning to drop fully nude female photos from its magazine. (Whether intentional or not, they did this on ‘National No Bra Day’ - a movement started in 2011 to supposedly raise awareness about breast cancer.)

It’s worth pointing out something I hinted at in August about Go Topless Day (here).

(Yes, it seems that every new holiday coming outta USA these days involves boobs or sex with someone other than your hetero-spouse.)

At first, it may seem good that Playboy is dropping full nudes. ‘After all’, some may say, ‘the SUN in the UK recently decided to drop its topless Page 3 Girls. This is surely progress.’

Lust carries within itself the seeds of its own destruction. Sex is a great gift from God to be enjoyed between a man and a woman who are married. But like nuclear power, this gift is destructive when taken out of its safe context.