Most people who are dull think that they’re clever and the worldly-wise tend not to be so wise.

We just tend to repeat popular maxims – most of which are untrue.

One such maxim appeared recently when discussing a certain sin with an acquaintance. He made the remark, ‘Well, there may indeed be certain Biblical passages that do condemn such behaviour, but perhaps God is leading us into a more enlightened time - one that is more in line with the inclusivity practised by Jesus himself.'
Through the centuries, different generations and groups have read their cultural ideals into Jesus. There is the Republican Jesus, the Marxist Jesus, the Equality Jesus, the Family values Jesus, the Black Jesus, the Aryian Jesus, the Eastern Mysticism Jesus, etc.

Our early 21st Century, Western culture is obsessed with ‘Inclusivity’. It, along with it's sister virtue 'tolerance' is the highest holiness of our generation. Within a few short years, being 'inclusive' is about the nicest thing you could say about a person, group, or business. Large companies and political parties now go to great lengths to be able to prove they're inclusive enough.

It is worth asking: have we done what other generations have done? Have we imposed our cultural ideal on Jesus and cherry-picked a few sayings (of debatable context) to support that view? Was Jesus really inclusive in the way our 21st Century, Western culture would like to think that He is?

And don't we read elsewhere how Jesus divides humanity into two definitive groups: the sheep and the goats; the wise virgins and foolish the virgins; the faithful stewards and the unfaithful? It's hard to imagine how Jesus could have been any clearer: some will be welcomed into his Kingdom, and some will not be. We read of him excluding as much as he is including. Our greatest priority must be to be among those who are included – and to call others to that path. 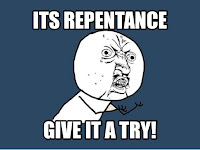 The first word out of Jesus’ mouth when he began his ministry was the word, ‘Repent’. It’s not a rock-star cool thing to command in our generation of doubt-flaunting, zeitgeist-sniffing, pretty preachers. It’s hard to put on sackcloth and ashes with a caramel latte in our hands - whatever colour the cup may be.

Yet the promise, with its condition, is ever present: ‘Repent and believe the good news and you will be saved.’

Our sins have damned us. Everyone is excluded from the start. But Jesus has paid – at his expense – the cost in blood to lift us out of our bed of consequences. He was excluded in death so that you could be included in Life. He was thrown out of the party so that you and I could be accepted into the only party that really matters.

Regardless of your past, you can be included. All can be washed and forgiven.

He will exclude those who are proud, who believe that they aren't sinners, that their sin should be celebrated, or that they need no Saviour. While we as Christians must be hospitable to all, the message we carry is clear: Jesus will include and exclude – the dividing line is repentance and trust.

Two men went to the Temple to pray. One was a Pharisee, and the other was a despised tax collector. The Pharisee stood by himself and prayed this prayer: ‘I thank you, God, that I am not a sinner like everyone else. For I don’t cheat, I don’t sin, and I don’t commit adultery. I’m certainly not like that tax collector! I fast twice a week, and I give you a tenth of my income.’

“But the tax collector stood at a distance and dared not even lift his eyes to heaven as he prayed. Instead, he beat his chest in sorrow, saying, ‘O God, be merciful to me, for I am a sinner.’ I tell you, this sinner, not the Pharisee, returned home justified before God. For those who exalt themselves will be humbled, and those who humble themselves will be exalted