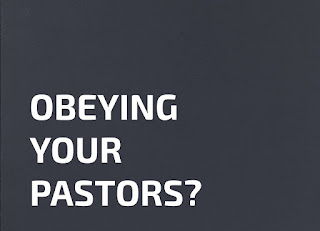 The Shepherding Movement of the 1970s screwed a lot people up. It was a movement that introduced an intense form of accountability and submission to leadership and it primarily affected newer British and American charismatic churches. The leaders of that movement have since all repented of this teaching - that should have been a clear sign to avoid practices associated with the movement. But no – sadly we are more foolish than we like to think. These bad practices floated like pollen through the evangelical air and have settled in all sorts of places. So from time to time I find people in the church who have been wounded by the spiritual leadership that should have been causing them to flourish.

I want to comment here on just one Bible verse in this post because it is more misused than any other by leaders who want to exercise control over others in the local church. It’s this…

‘Obey your leaders and submit to them, for they are keeping watch over your souls, as those who will have to give an account.’ -Hebrews 13.17

Does this mean what heavy shepherding leaders want it to mean? I'm a Biblicist, so I certainly care what the literal point of the text is. Are we to obey whatever our pastor tells us – as if we are submitting to God himself? Can our pastor tell us to quit our job, marry someone or even attend every service the church runs?

I understand the appeal of this verse to leaders. I am a church leader myself. At times there are conflicts or issues in the church and it would be nice to command everyone’s obedience in order to fix any and every problem. Heavy Shepherding leaders teach that this verse does give them such dictatorial powers.

How do we respond?

Here are the Greek words in the New Testament that are translated as ‘obey’:

The first word is peitharcheō and it is used 4 times in the NT. It means obey in the clearest and strongest sense. It’s what most of us mean when we use the word ‘obey’. It is twice in reference to obeying God and once to obeying a bit of sailing advice that would have kept a boat from crashing. One more time it is used of an actual person in a leading role - to a civil leader and the law:

‘Remind them to be subject to rulers, to authorities, to be obedient, to be ready for every good deed.’  - Titus 3:1

In other words – obey the law. Pay your taxes, stop at those red lights. Christians shouldn’t be in jail. Unless they are asking you to sin, do what they say. The New Testament does not teach absolute submission to any human. That is reserved for God alone. But the one time this strong word is used for a human, it is used for the Law (or the Magistrate).

The second Greek word that is translated as ‘obey’ is both more frequent and more nuanced. It is the word hypotasso. It is frequently translated as the word ‘submit’ and it is used 40 times in the NT. Here are two examples:

‘Wives, submit to your husbands, as is fitting in the Lord.’ – Col. 3.18
and..
‘Jesus went down with them [his parents] and came to Nazareth, and He continued in subjection to them; and His mother treasured all these things in her heart.’ –Luke 2.51

This is a type of obedience that is – to a degree – voluntary. It can’t be purely commanded. It is a calling, not a simple military act. I am called to sacrificially love my wife in the same way that my wife is called to submit to and support my leadership. But those aren’t things we can’t really demand of each other and expect they be given in their full measure. We do these things out of respect for each other and love for Christ and his ways. As with human law, it is conditional - and perhaps to an even greater degree. As a husband, it is inappropriate (if not sinful) of me to ask my wife to break the law.

Which word do you think is used for ‘obey your leaders’ in Hebrews 13? The stronger word or this slightly softer word?

Naughty of me. It was a trick question. There is a third word here and it is peithō. It means to persuade or be persuaded by. It appears 63 times and the vast majority of the time is used simply to mean persuade, to listen to or to win over. Here are some examples:

‘But the chief priests and the elders persuaded the crowds to ask for Barabbas and to put Jesus to death.’ –Matthew 27

‘But he said to him, ‘If they do not listen to Moses and the Prophets, they will not be persuaded even if someone rises from the dead.’ –Luke 16

First of all not all translations do translate it as 'obey'. The CEB translation tries to reflect the softness of this verb by translating it as ‘Rely on your leaders and defer to them’.

Secondly, we use obey because we really don’t have good English way of translating it. ‘Give your leaders a chance to persuade you’ is a mouth full of chalk to read – even if it is a more accurate rendering.

Lastly, in this qualified sense, we really should obey our leaders. We should listen to them, consider what they have to say and stop opposing them and making their jobs difficult. But this is a far cry from the complete obedience that the Shepherding pastors try to make it out to be. We do not submit to them like we do Jesus. We are his sheep and we follow his voice. Pastors are guides and we should – if they live godly lives and faithfully preach the gospel – respect them.

Be assured, the word used for ‘obey’ here is the least dictatorial of the three and it cannot be commanded by the leader. Rather, scripture calls elders to never ‘lord it over the flock’ (1 Peter 5).

Hope this helps to clear things up. If you found this helpful, please consider sharing this article with anyone you know who has been subject to heavy shepherding and spiritual abuse.
_________________

For more on healthy spiritual leadership, check out Elijah Men Eat Meat: Readings to slaughter your inner Ahab and pursue Revival and Reform (Get Here)