Keep Sane in the Midst of Racial Insanity 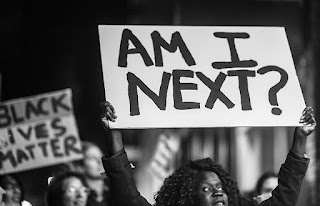 The last few days have been emotional – both in the land of the living and in the pseudo-world of social media. Upon seeing emotionally charged pictures, videos and articles I found myself wanting to either repost or retweet - or else YELL in disagreement.

The words of the James, ‘be slow to speak and quick to listen. For the anger of man does not work the righteousness of God’ are especially relevant for Christians when social feelings reach code red levels. Here’s where society seems to be ATM.

That’s society around us. Emotionally - if in no other way - we are all black and blue. What are some things Christians need to keep in mind during the days ahead if we are to remain sane and and active with God's work?

First of all, we cannot be among those who dismiss racism as not a problem. Sin is buried deep in the human heart – which is why racism and other forms of discrimination come so naturally to us. If people feel hurt, we need to listen and extend love and compassion to white, black, Arab, Jew, etc.

Secondly, we need to be discerning and careful with our words. Emotional words spoken in reaction to half a news story or media sound bites often inflame tensions. Make no mistake, this stuff boosts ratings and sells papers. We need to be a people who hear the whole story before we make judgments and fire off on FB and start playing the blame game.

Lastly, we are part of a new society where Jesus is the King. Paul writes that for Christians ‘There is neither Jew nor Gentile, neither slave nor free, nor is there male and female, for you are all one in Christ Jesus.’ To enter into God’s new family we pass through the body of an innocent, murdered man – Jesus Christ. His blood was shed to wash and forgive the guilty. And it was every colour of fist that helped drive in his nails. In this family things work differently than in the world around us. We receive each other – whatever race – as family because Jesus has adopted all of us into his big and generous home.

Practically, what does this mean? It means that I am limited in how I can change the world’s problems outside of this family. In the world outside, Jesus is not recognised as Lord, forgiveness is not a free gift that flows from on high, and people’s identities are not rooted in God’s kind grace.

It is different when we see racism in the church. In your church, you probably have people referred to as ‘deacons’. Do you know where that term comes from? It comes from Acts chapter 6 when discrimination began to creep into the church between those of Hebrew background and those of Greek background. Deacons were chosen to lay the smackdown on that evil and to ensure that everyone was treated with justice. 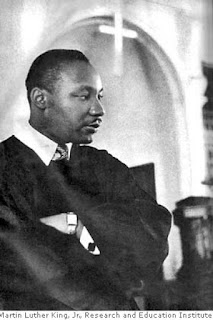 This is the legacy of Rev. Martin Luther King Jr. For all the flaws he may have had in his private life, he got one thing right – he knew how to call people to repentance. Before King arrived, there had been secularists working in the Deep South who tried to end racial discrimination, but with little success. When King arrived, he knew that many there were either Christian – like him - or at least had a conscience that was sensitive to Biblical teaching. For that reason, he didn’t go around saying, ‘You guys need to stop being so religious, get with the secular program, realise we all evolved from the same set of primates, etc.’ No. He opened his Bible to the prophet Amos and cried ‘Let justice roll on like a river and righteousness like a flood!’ Using Scripture he fought and beat Jim Crow where secular attempts had failed. He did the job of a deacon.

Here’s the point: that worked for MLK because many of those to whom he spoke – both black and white – professed that Jesus was their Lord. King simply made them see the inconsistency between what they professed to believe and what they actually lived out - and many repented of their hypocrisy. Reconciliation and justice began to grow.

Today is different. We can still fight to correct the sin of racism whenever and wherever it begins to sneak into the church. But American and British society has taken a decidedly secular turn since King’s day and the prophet Amos is not quite as ‘down with the kids’ as he once was.

This mess will only get messier. We can try to be peacemakers and speak calming words to enraged people – and our example may help in small ways. But we cannot fundamentally fix all of this world’s problems. We can, however, welcome people into a new world. Trying to teach forgiveness and reconciliation between humans is a distraction to our real task if we don’t first show them how to receive forgiveness from God – and that’s where the power resides. If man is not a fallen son of heaven, then he is a disease of the dust - or an animal gone insane. If the secular humanists are right, then ultimately #NoLivesMatter. But if God created man in his image with dignity and worth, then #BlackLivesMatter because #AllLivesMatter and every life broken by sin can be fixed and forgiven because #HisLifeMattered.

If we want people to walk out a new life, we have to tell them about the new birth. It is our job to preach the good news to people of all races, in all nations. We welcome all people into God’s family. Here, we find forgiveness for the cop who shot the innocent black man and for the black sniper who shot the innocent cop. Hearts of stone will be taken out and hearts of flesh given free of charge to the sinner. Let's be busy with that.

In the new world, the lion lays down with the lamb.