Nice, France - and the Demons of our Day 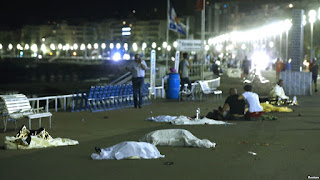 Like many of you, I awoke this morning to learn about yet more people butchered by the hands of a hate-filled thug. Tragic! In the Anglo-Saxon world our political leaders have shied away from naming the ideology that these reoccurring thugs hold to. But last night the President of France rightly called it: he was a thug who embraced a version of radical Islam.

This time it is 84 innocent people killed in Nice, France. The weapon of choice? A truck. Last week it was almost 300 murdered in Bagdad. Before that, it was party goers in Orlando. There’s a website that monitors terrorist attacks done in the name of Islam – most of which don’t make Western headlines. It’s averaged more than one a day for many years.

I spent five years in France – working not far from Nice – among both the secular French and the Muslim North Africans who settled there. I made friends with both groups. I thank God for the millions of professing Muslims around the world who – like my friends in France - want to live peaceful lives. But to pretend that there isn’t a strand of Islam that stands in historic succession to others and that wishes to conquer through violence is mere delusion. Mohammed was a warrior and Islam grew during its first three centuries through military conquest alone – not missionary preaching.

In the West, some people’s reaction to this Mohammedian bloodthrist is nationalism. This is growing in both Europe and USA. It was reflected in some of UKIP’s support of Brexit and in some of the more outlandish statements by Donald and his Trumpkins. From a standpoint of self-survival, it’s an understandable reaction. They see killing being done in the name of Islam – and as they cannot discern a peaceful Muslim from a militant one – they want to shut their borders to all. But though Islam may have a devilish streak, Nationalism has its own box of demons. Soviet Russia, Red China and Nazi Germany were all Nationalist movements of sorts.

The Crusades were also born of a Nationalist impulse. It is often forgotten that - from a European standpoint - the Crusades were a defensive war. After taking over all of North Africa and the Middle East, Islam was beginning to invade Europe, sword in hand. During this war, European kings raised armies to protect themselves from the Islamic armies. And - as Christianity was a fairly common thread that united most of these diverse European Kingdoms - they painted crosses on their shields as a show of unity (even though many of the soldiers were personally pagan.) Christian voices such as St. Francis of Assisi raised their voices in opposition to the idea of the Crusades (St. Francis was a gospel preacher trying to persuade Muslims to faith in Christ). But sadly voices such as his was drowned out and Nationalism painted with a Christian veneer went out to fight the invaders in a way that was as ruthless in spirit as that of the attackers. Islam has a long memory. And many of those Muslims in France with whom I shared the good news about Jesus reacted as if the Crusades were yesterday - and that they are a part of orthodox Christian activity.

Mohammed killed his enemies with his sword. Jesus allowed himself to be killed by his enemies. And it was for them that he died.

As Christians, we cannot react with fear. That is the whole goal of terrorism. Each day far more people are killed by vehicle and other accidents than by terrorists. But it’s the surprise and intentional way that terrorism is done that strikes fear in the hearts of those whose treasure and security is in this life. As Christians, our lives are hidden with Christ in God and we have no need to fear death. Islamic terrorism doesn’t increase the death rate. It remains the same: one per person. If we know that the same Jesus who beat death through his resurrection owns our very lives, we can have the strength we need to walk in both courage and compassion in the coming days.

Also, as Christians we cannot be cowards with our words – but nor can we afford to be reckless with them. There’s a significant element within Islam that poses a violent threat to the West – and it will only get a lot worse before it will get better. We do no one any favours be bring shy to say this. Thousands more will die – whether the West closes their borders or not. But we cannot respond to the sin of Islamic violence with the sin of indiscriminate Nationalism. Humans tend to embrace one demon in the hopes of being saved from another. But evil is within – not just without. God loves all people of all nations – and He’s not a fan of the unbelief and pagan sexuality of the West any more than he is the violence of the Middle East. He’s not rooting for France, the UK or the USA in that way. He’s no more on the unreligious Western side than He is on the religious Islamic side. He’s on His own side and through Jesus calls all men and women to himself.

There’s never been a better time to love, pray and preach the good news to secular Westerner and Muslim alike. France’s hope is Christ. As an immoral nation she’s been running from the Saviour, Teacher and King that loves her. Pray for her and for those blinded by the Islamic veil. #PrayforNice #PrayforTheIslamicWorld