Imagine you're walking through a high-school library when you come across a group students studying for a literature exam. They know in advance that one of the sections will be on 19th century French Novels. You hear one of the teenagers say, ‘I read The Three Musketeers. Anyone else?’ How surprised would you be to then hear…

‘For me it was a stirring overview of global economic history – though I’m unsure about the author’s predictions of a violent rise of the proletariat.’

‘I was so happy when the wizard came back as D’Artagnan after his fall in the mines of Paris.’

You might interrupt – that’s not how The Three Musketeers goes. After all, you read the book in college and had seen film adaptations as a child. You know how it goes.

What if those students then respond to you by saying, ‘That’s just your interpretation. It means something different for us. Did you read it in the original French? There are different translations – maybe yours was different than ours.’

Would you even know how to begin to respond? Such statements about The Three Musketeers are absurd. And like many absurd statements - to address them adequately does take some reflection.

Admittedly, the example above is extreme. From Marx’s Communist Manifesto to Plato’s Republic, we trust reliable, scholarly translations and the ability of the human mind to make general sense of a work. Fortunately, no one really ever speaks in the above ways about most books. Sadly, the one book that our generation does speak of in these ways is the most important book this world contains.

I get the points raised by post-war, Existentialist philosophers like Derrida who rightfully point out that as finite and fallen humans we cannot 100% take in the full depth and potential of meaning communicated to us by someone. In our finitude there is always room for us to understand more fully what is being said or written.

Admittedly, we also change - and that adds shades of meaning to what we hear and read. The words ‘I love you’ may mean one thing on our third date. But that same phrase may have much more depth and width on our 50th wedding anniversary.

Likewise with the Bible. When I first started reading the New Testament at age 12, I understood much of what I read and it had deep, life changing meaning for me. Now – after many years of studying it, reading it in different languages, and trying to apply it – the meaning is enhanced.

We may also freely concede that there is legitimate debate among translators – not just of the Bible but of all works. Some translators try to translate books and letters with more of a word-for-word approach. Others try to translate sentence-for-sentence or even idea-for-idea. Though the general meaning will still be preserved, it gives the reading a different feel depending on what translation you choose. (My recommendation and practice for the Bible is to read scholarly translations of both methods.)

These issues regarding interpretation and translation are acknowledged. But when it comes to the Bible, sometimes people exagerate and stretch these ideas to undermind the readability and reliability of its message. In my pastoral experience, most of the time when this happens it’s not the parts of the Bible that people don’t understand that are bothering them – it’s the parts they do understand but that they don’t agree with. They don't want it to say what it clearly says. 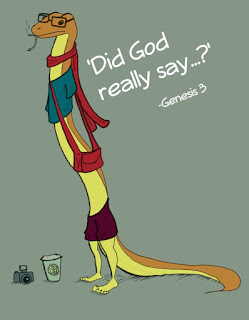 Doubt is the new sexy. Some pretend that what the Bible ‘actually’ says is too difficult an enterprise for mere mortals. Preachers who do this are zeitgeist-posers who are trying to fit in with the cool kids. Getting up on stage and talking about what a hard week you’ve had and how you have issues with this week’s Bible passage, and how it’s a real struggle to understand why Paul would say something so harsh (a nice guy like you certainly wouldn’t have written that!) is to miss the point of Biblical preaching. The Bible acknowledges that we may struggle with doubt – but doubt is never meritorious.

Scripture refers to preachers as messengers and ambassadors. Imagine two armies getting ready for battle. Before the battle the lead general of the first army sends a messenger on a horse to the lead general of the other army. Now, whatever the message actually says – whether it is terms of peace or a call to surrender – one thing the recieving general will not do after reading the message is to look up at the messenger and ask, ‘So… how does this make you feel?’ The messenger is not asked how he feels about his general’s message - that's irrelevant to the main task.

Preachers, your own feelings and struggles with doubt and sin – and we all have these from time to time – are not the main issue. You do not need perfect faith to communicate the message. We simply need to relay the full counsel of the book we’ve been given.

For a look at what the Bible DOES say about close friendship between Men and Women, check out Forbidden Friendships available on Amazon in Paperback and Kindle in the USA and the UK