Why is the Cross such a Big Deal?

Biographers typically use 99% or more of their book to describe the details of a man or woman’s life. Their words, relationships and accomplishments are what is paramount. After describing their life achievements, the biographer then takes a few paragraphs to describe the person’s death.

But with Jesus, it's completely different.

When you read the biographical accounts of Jesus – Matthew, Mark, Luke or John – you will notice that the whole book is building to a climax: his murder. Almost 50% of John’s gospel deals with the week of Jesus’ death. There is no other historical figure whose death commands so much attention. 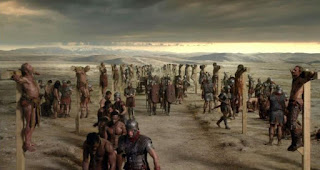 More songs have been sung about Jesus, more books written about him, more paintings painted of him – than any figure in history. In all this, it is the means of death – crucifixion – that commands the most attention. The result is that today the cross is the most widely recognised symbol in the world.

The Persians began the method of crucifixion by impaling someone with a single pole and letting them slowly die in public. The Romans added the patibulum - the horizontal bar - and sought to perfect this method by making it as drawn out and painful as possible. The person was stripped naked - especially shameful for Jews. The torture would be so intense that the victim would be unable to restrain the excretion of wastes. They would have to pull themselves up using the nails in their feet hands just to breathe. Dying could take days.

It was a type of death reserved for slaves or traitors. So terrible was this form of execution that a word had to be invented to describe its horrors. It is the word ‘excruciating’ – which means ‘from the cross’. Many people were executed in this way. Alexander the Great killed 2,000 people with this method after his siege of Tyre and the Romans executed Spartacus and 6,000 of his followers likewise - with dying men on crosses lining the roads to Rome to serve as an example.

Though this method was banished by Emperor Constantine three hundred years after Jesus, there have been regular resurgences of crucifixion as a way of killing Christians throughout history - the most recent being in Afganistan, Syria and Iraq.

On the day Jesus was murdered, there were two rebels being executed near him. What seemed shocking to so many was that the early Christian movement referred to this death as ‘gospel’ or ‘good news’. It may still seem bizarre 2,000 years later. Even if one takes into account his resurrection three days later, wouldn’t it have been better if Jesus hadn’t been killed in the first place? Certainly not in such a horrific way?

Jesus’ last words give us clue as to why Christians see this as ‘good news’. He said seven words from the cross, but there are two which are the most well recorded and most known.

The first is: My God, my God, why have you forsaken me!

Jesus was not screaming ‘Ahhh! My hands, my feet!’ The worst pain Jesus was experiencing was not the physical torment, but the spiritual and physiological torment of being cut off from the Father he had always known in perfect love. Jesus was experiencing a depth of rejection that is far beyond what you and I will ever have to experience. He was drinking the full cup of hell – and he was doing it on our behalf.

Jesus lived a perfect life of love – unlike you or me. He then took the punishment and rejection that our sins deserve and exchanged his cosmic throne for humanity’s electric chair. The Creator God who must morally judge the universe is also the one being judged on our behalf. All of the darkness that we have brought into our lives, he takes upon himself and from that heart of darkness, he loves us.

Jesus’ other well-known phrase is his final one: It is finished!

Don’t pity Jesus. Don’t weep over him. He was a man on a mission. He voluntarily paid the price for your sin and has come through the other side - to save you from the gallows of your own foolishness. He has opened the door to bring into God’s family anyone who comes to him in trust and repentance.

Three days later he was raised from the dead and now gives forgiveness and eternal life to anyone who comes to him in humility – regardless of background, intelligence, attractiveness, wealth or morality. There is no one so perverse that Jesus cannot heal them. There is no soul so soured with sinning that Jesus cannot make new.

That’s why the cross is such a big deal.

For more on Jesus, check out Elijah Men Eat Meat: Readings to slaughter your inner Ahab and pursue Revival and Reform (Get Here)
Email Post
Labels: crucifixion in history why is the cross so important