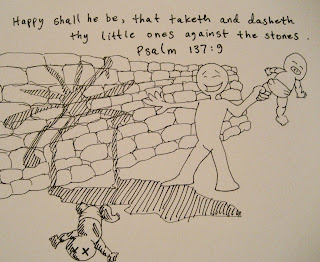 Occasionally, when discussing faith, an agnostic or atheist may say something like, ‘Yes, but you can’t take the Bible seriously. After all, doesn’t it command us to bash in the brains of babies?’ We can see stuff like this on Twitter and in Facebook memes.

Before beginning to address the actual verse they’re referring to, let me start by saying how glad I am to see atheists caring about the brains of babies! Amidst our current social insanity, they’re currently being carved out and sold off. We welcome you into the pro-life movement! Here’s a sign.

But to the point. Most Christians are familiar with the passage of Scripture – Psalm 137. If seen on an atheist meme it’s usually just the final line that’s quoted without the context:

Happy is the one who takes your babies and smashes them against the rocks!
–v9

Ouch. How would you explain this verse to a friend who isn’t a Christian who saw this on a meme?
Context

Context is always a great place to start. Reading the whole Psalm explains a good bit. The first three verses places it in a unique period of Hebrew history:

Beside the rivers of Babylon, we sat and wept as we thought of Jerusalem. We put away our harps, hanging them on the branches of poplar trees. For our captors demanded a song from us. Our tormentors insisted on a joyful hymn: ‘Sing us one of those songs of Jerusalem!’

The Babylonians destroyed Judah and Jerusalem in 589 BC. They killed masses and kidnapped the professional class taking them to work in Babylon.  This Psalm was written by them. They had just seen their friends impaled on sharp sticks in the ground (an ancient precursor to Roman crucifixion), their wives raped and killed, and their children picked up by the feet and bashed on the rocks as sport for the soldiers. Comparable incidents in Jewish history might be the 20th Century's COmmunist purges or the Nazi Holocaust. It was an encounter with unimaginable evil.

Wounded, hungry, grief-stricken, and traumatised they are being marched to Babylon. They stop for a drink by the river and at this point the soldiers - in a perverse mockery – command the kidnapped Israelis to stand up and sing happy songs.

It’s rather easy to critique the author of Psalm 137.9 in the comfort of our warm homes with our lattes by our laptops. But in that situation, how would you react? How would I react? How would an Atheist, a Muslim, or … anyone react?

Probably not as healthily as the author of this prayer. He offers up a lament and a prayer for justice. In verse 9 he prays that the same sorrows that the Babylonian soldiers have inflicted upon the Israelis will be return upon them.

What can we learn?
First of all, it’s obvious that this is not commanding us to go out and bash babies. It's a scream from man to God - not a command from God to man. The man praying doesn’t say that this is something he personally will do. He is simply a traumatised man asking God for what he feels to be justice in light of what his people have just experienced.

Secondly, we cannot forget that God really does care about justice. Jesus’ command to ‘turn the other cheek’ doesn’t replace Moses’ principle of ‘eye for an eye, tooth for a tooth’. The second is built upon the former. We can only give mercy because God promises justice.
How’s that work?

You and I will never suffer like the writer of Psalm 137. Let's face it, we can whine like crushed grapes over the most trivial of things. But there really will be times when someone hurts us deeply. Perhaps a spouse cheats on us with a friend, or we are abused physically or sexually. Perhaps a parent rejects us. In the midst of processing these deep hurts, we may cry out for justice and revenge.

The fact that God allowed this prayer to be recorded is a tribute to human emotion and recognition of the moral pain involved in this type of suffering. When we are abused and cry out for justice God doesn’t say, ‘Tisk, tisk. Be good. Turn the other cheek – because that’s what I’m going to do to your abuser.’

No. There are times when we face extreme injustice and something inside of us screams out for blood. And that’s not wrong. God says that he will judge the world - and in the end, no one gets away with anything. We don’t have to pursue revenge, only because we trust that God will do justice to everyone.

There will be blood. If the abuser doesn’t repent, it will be his blood. If he does turn from his evil and seeks forgiveness and mercy from God and man, there still will be blood – God’s blood. That’s what the cross is about. Mercy doesn’t come at the expense of justice. It comes because someone else is willing to take the justice on our behalf.

But why Care about Babies?
Lastly, supposed moral objections to Scripture are always the weakest point if one is arguing from atheism. After all, in a godless universe, who cares what happens to babies any more than what happens to the bacteria in my toilet when I bleach it? Who decides humans are more important than germs? Aren’t both ultimately time and chance acting upon matter? Won’t both be eliminated one day when the sun gets big enough – if not before? Isn’t the appearance of organic life on this planet just an accidental fluke that is here today, gone tomorrow – a flash in the life of the Universe?

If a human baby is not the image of God – but just random bits of stardust shrapnel – then bash the brains away. Let their blood flow like anti-freeze. Why should any of us care?

Am I misrepresenting atheism as some do Psalm 137? I’ll let Atheist guru Richard Dawkins speak from his book Out of Eden,

In a universe of electrons and selfish genes, blind physical forces and genetic replication, some people are going to get hurt, other people are going to get lucky, and you won't find any rhyme or reason in it, nor any justice. The universe that we observe has precisely the properties we should expect if there is, at bottom, no design, no purpose, no evil, no good, nothing but pitiless indifference.
DNA neither cares nor knows. DNA just is. And we dance to its music.

So what’s the objection to Psalm 137 again?