The Cross and the Frog: reaching out to the Alt-Right

The Alt-Right is a Xenophobic movement filled with deplorables that are beyond redemption.

Or so I'm hearing.

The idea behind the term 'Alt-Right' is that it is an alternative to mainstream conservative parties – the Tories here in the UK and the Republicans in the USA. The term has been used by some to refer to those who enthusiastically supported Brexit and Trump in the 2016 elections. Many in this group perceive Western-Civilisation to be in decline due to internal weaknesses and want to revive what was classically good.

When I write about the Alt-Right, I write as an outsider - but not as one trying to arrogantly dismiss them or their concerns. Therefore the main point of this article seeks neither to validate nor invalidate the views of the various groups associated with the Alt-Right. Obviously, those alt-right groups that are based in racism need to be opposed. But we also want to save - not just condemn. We want to equip ourselves with a missional mindset for engaging, understanding, and even (where possible) sympathising with some of their concerns.

James writes ‘Be slow to speak, quick to listen, and slow to anger.’ That’s rare in politics. One thing that will close up anyone quickly is to misrepresent them. If words like ‘racist’, ‘misogynist’, ‘xenophobic’ are the first things that come out of our mouths when dealing with the Alt-Right you may need to check your heart. 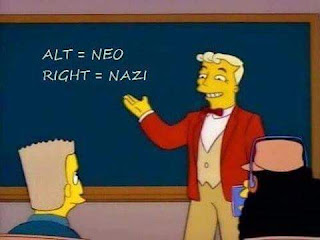 When you care enough to look closer, you realise just how incredibly diverse the various groups are that get put under this umbrella: Libertarians to gun owners to white supremacists. They don't all fit the stereotype. So we have strong ideological oppostion with - others less so.

For example, one of the major Alt-Right players is Milo Yiannopoulos. He is an immigrant to the UK from Eastern Europe, he’s part Jewish, and he’s openly homosexual. He’s also one of the pioneers and chief editors of Breitbart News – the main Alt-Right news website that is often dismissed as being homophobic, neo-Nazi, and anti-immigrant.

If you paint the Alt-Right movement with too broad a brush – in word or on social media – your chances for sharing the good news about the resurrected Jew from Nazareth will be slim. This is true of any group, but particularly here. Though we oppose some of the ideology in the alt-right, opposing ideology isn't enough. We want to save souls.

Pray for the Alt-Right individuals you many know and pray for the movement as a whole. It may be a temporary movement that fades. Or, like LGBT, it may organise, develop leadership, and develop a clearer agenda for social and political change. Let's pray that God would take this movement into a healthy direction that will be good for society.

We can't reach those that we don't empathise with. So here's an exercise that may stretch some of us: let's put on a pair of Alt-Right glasses for a moment...

Imagine growing up as many white, working class males do – in poverty. The term ‘white trash’ gets used to describe you and your family regularly. You see affirmative action and scholarships sometimes offered to the ethnic minority youth in your neighbourhood - but you’re white and not eligible for those. You’d never consider yourself a white supremacist, you simply feel treated unfairly.

Imagine that you hear of protests happening when a black person gets shot by police. But when your white friend gets shot by police - no one seems to care. You don't disagree that 'Black Lives Matter', you're just wondering why your friend's life didn't.

Imagine that you don’t get to see or care for your two-year-old child very often - even though you know the mother is on drugs and lives with her new boyfriend. The law - which favours a mother's custody right's over a father's - makes you pay lots in child care (even though her new boyfriend makes more than you).

You try to complain about these issues, but you're dismissed and told to 'check your privilege' or to 'fight the Patriarchy'.

Imagine that neither Republican nor Democrat (or Tory & Labour) seem to be doing anything to help your situation I life. You feel that you get no breaks. And because you’re a white male, you grow up hearing that most world problems are your fault – and no one with a platform seems to argue back.

Imagine that you are angry and feel forgotten by the world.

Then a powerful movement like the Alt-Right comes along… what do you begin to feel when you hear other voices crying out about an injustice you can relate to?

Please take the glasses back off. As Missionaries we are not called to adopt the worldview of those we are reaching. It is simply to understand it and sympathise with people where possible. Christians are called to be a people who listen - even if we perceive a person's political talk to be a torrent of turpentine.

This is sort of listening is hard for those who find their identity in political movements - but as Christians, we appeal to a higher altar.

Feeling not listened to runs deep among many in the Alt-Right community. We may disagree, but if we are seen to be dismissive of them, we will not be given a hearing. If we judge a person more through a political lens than we do through a gospel lens, we will fail to be the kind neighbour and faithful witness that Christ calls us to be.

This does not mean we should never express disagreement with certain Alt-RIght ideologies. We should stand firm against idolatrous forms of Nationalism and racial exaltation. Patriotism can be a false religion. But we listen first - and speak with both courage and humility later.

Good News for the Alt-Right

The young man we described above feels validated by the political victories of Brexit and Trump. (That's not to imply that everyone who supported Brexit or Trump associates with the Alt-Right - though some broad-brushers may consider them to be.) The young man experiences the Alt-Right movement in a messianic way.

But the trouble with movements that make messianic promises of justice or righteousness – LGBT, Islam, Nationalist movements, etc – is that they are not the Messiah and can never deliver the type of justice and righteousness our souls really need.

Only Christ can give this young man the value and affirmation that his heart really longs for. Alt-Right politics – whether we sympathise with some of the views or not – will not reconcile us to God. Being involved in politics is not wrong in itself, but if we build our identity on it, or grant it an apocalyptic style hope, it will one day break our hearts.

Many people in the Alt-Right feel betrayed, unfairly treated, and misrepresented. They are looking for a renewed civilisation that will not be destroyed. The Gospel speaks to these hearts. There was someone else who was also betrayed. He was also unfairly treated. He was misrepresented and lied about in the trial that determined his execution. He left his civilisation of heaven to identify with the castaways of earth.

Can Christian Men and Women really be 'just' Friends?
Forbidden Friendships - available on Amazon in Paperback and Kindle in the USA and the UK.
Email Post
Labels: christianity and the alt-right god loves the alt-right how to reach the alt-right the cross and the frog