Who am I? An American by birth who immigrated to the EU after high-school and have lived here ever since. My wife and children are Scandinavian. I've developed a fondness for their welfare state - one that usually works. I'm still an indie-voter in American elections. But I couldn’t bring myself to vote for either Hillary or Trump in the last election. I was somehow hoping both would lose. In some causes, I’m more sympathetic to the Left. In others to the Right.

I’m writing to you because – though I am concerned about some of the things happening in the White House – I’m far more concerned about your reaction to these things. You used to be champions of Free Speech. When did the Right pick up that baton? On Inauguration Day the world saw violent anti-Trump protests. Recently, there were two student riots (one in Berkeley and one in NYU) when a conservative student group invited a conservative speaker on campus to talk to them. Hundreds of Left wing students felt that the natural way to react to right-wing views was to dress in black and destroy stuff. We're not speaking of a one off here. This is becoming normal.

Dressing in black, setting things on fire, and smashing windows…in order to ‘protest fascism’? I hope you're still not so enraged by the results of the last election that you're blind to the irony. (An irony made more pointed when one realises that the conservative speaker in question was also a gay Jew.)

Many of you prefer the term 'progressive' to Left-Wing. Fine. What does progress in behaviour look like? What are we trying to progress towards? Progression and regression all simply depend on what direction we're aiming for.

I'm not trying to generalise or paint a strawman image. I know most of you aren’t violent. But right now the popular image of you is someone who throws violent temper tantrums when you lose instead of engaging in intelligent debate. You can change that image. You need to be the first to denounce the violent Alt-Left among you – don't let Breitbart News beat you to it. Correct those in your midst who deny free speech.

The Republicans have won a majority in the Senate, the House, State Governors, etc. You speak of being ‘The Resistance’. But right now, your ‘resisting’ seems to consist of rude protest signs, dressing up like female genitalia, Facebook memes that call Trump supporters ‘misogyists’ and ‘xenophobes’, and the occasional bit of violence.

Friends, if you do not engage in thoughtful, listening, civil debate, you will continue to lose elections. And America will be the weaker. It may be a cliché, indie-voter thing to say, but an eagle needs two wings to fly. I would not like to see America trying to fly with nothing but its right wing.

And yes, I have concerns about the Right too and I've written about the dangers of nationalism and the Alt-Right elsewhere on this blog. Yes, they have their issues. I do NOT want my sons to grow up to be like President Trump in many regards. If you're looking for faults, he has plenty. But there was a clever chap once who once said something about specks, logs, and eyes (google it). 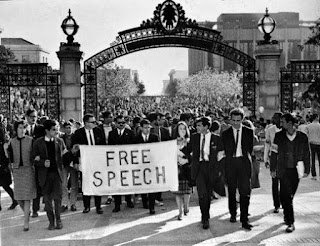 If we look at the man in the mirror (as another, not quite as clever, chap spoke about) then we can see an example of this Leftist malaise. Let's simply compare last month’s two DC marches. One was a (largely conservative) pro-life March. Watch on YouTube the main speeches given at each. Please, simply compare them.

You will see that Vice-President Pence spoke at the one and gave a calm and dignified speech (whether you agreed with his ideas or not). He never once vilified those who disagreed with him. He called his fellow Pro-Lifers to be more compassionate and better listeners. By contrast, the ‘Women’s March’ that happened a week before chose as its main speakers Madonna and Ashley Judd. Both demonised their ideological opponents. One threatened to blow up the White House and the other called women to be more ‘nasty’.

Democrats, you were the party of Jaqueline Kennedy and Eleanor Roosevelt. They were classy. What happened?

When a left wing speaker comes on campus, right-wing students don’t violate Starbucks. They may say dumb or rude things about them, but they don't try to deny them the right to speak.

Please… I’m appealing to the good in you, get your house in order and regain your lost image of civility so that balance can be returned to the force. Don’t be the movement of rioting, ‘nasty women’, strawmen FB memes, anti-free speech, and burning stuff. We need your intelligent voice again.