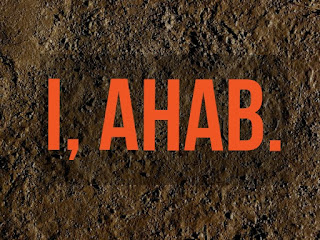 'Ahab did more of what YHWH considered to be evil than any king who lived before him.'
-1 Kg 16

It was a wicked culture. Now I know we like to pretend that all cultures are equal and that one isn't better than any other. We say that cultures are just different. But that's not true. Some cultures are more perverse than others.

Here, a wicked generation had created a wicked culture. And though many people were culpable to some degree, one man was responsible above all.

Ahab is said to have been more wicked than all the previous Israeli kings combined. It had been 58 years since the kingdom was torn in two after Solomon, and the 10 tribes had been ruled by a succession of 7 bad men. But now Ahab led the nation in creating a toxic culture that exceeded his apostate forefathers. It was a poison to all, a generation steeped in a darkness greater than any midnight. How had this happened?

Call in the usual suspects.

To start with, Ahab imported Baal worship into Israel with a zeal. It became all the rage among the who’s who. It was everywhere. His predecessor King Jeroboam’s bull worship seems to have been just a warm-up for the spiritual and theological evil that was Baalism. It spread through the land like aggressive cancer, turning the hearts and minds of the people away from the God of their forefathers – Abraham, Isaac, and Jacob.

There was also the worship of Ashtoreth that Ahab promoted. This was Baal’s female cohort. The worship of this goddess was like dumping petrol on the already existing flames of sexual immorality. People had sinned in previous generations. But now it was open defiance against what was written. Wickedness was now publicly celebrated with no shame.

Finally, there was the woman. Ahab was the first King to take a princess wife from a foreign, pagan king – something forbidden by Scripture. We don’t know why he married princess Jezebel. Perhaps his successful father, King Omri, had arranged it. Perhaps he did it for the sake of political stability and economic opportunity with their prosperous Phoenician neighbour. Or perhaps he just thought she was pretty hot.

Whatever the motive, Jezebel took a wicked situation and made it far worse. She found Ahab to be a moody husband that she could easily manipulate and was soon the one wearing the trousers in the kingdom. She was an evangelist for the false religions of Baal and Ashtoreth and once securely in power, she sought to eliminate the worship of YHWH. Ahab was ultimately culpable because he allowed it all to happen on his watch. Jezebel may have been the active one, but just as Pontius Pilate would learn centuries later, a leader cannot wash his hands of responsibility with just a little water.

Men, how will you shape the culture of your generation? The way you worship God matters. The way you exercise self-control over your sexual and other appetites matters. If you marry, the woman you choose matters. We are not islands. Choices that we think of as being private are the very ones that shape our character. Even our laziness and passivity has an effect on culture.

Ahab made bad choices in his personal life and his name is now forever carved on the stones of history for leading Israel into apostasy. He failed to worship the Creator God in private and failed to lead well in public.

How can Christian Men and Women have meaningful friendships without scandal? Please check out Forbidden Friendships - available on Amazon in Paperback and Kindle in the USA and the UK.
Email Post
Labels: Ahab ahab generation an ahab spirt Elijah Jezebel