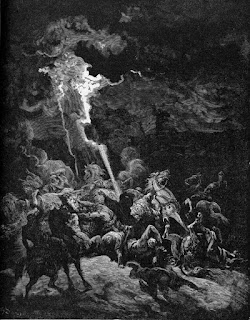 ‘O man of God, I plead with you, let my life, and the life of these fifty men, be precious in your sight. I know that fire came down from heaven, and burnt up the two captains and their squads of fifty men each.’ -2Kings 1

King Ahaziah, son of the late king Ahab, sends a captain with 50 soldiers to go fetch Elijah who is sitting on a hill. Like the king, this captain and his soldiers have no fear of God. They arrogantly command Elijah to obey the message like he’s the king’s lapdog. As a result, God drops fire on them. The king then sends another 50 up the hill in an equally proud manner – and God equally napalms the lot of them. Lastly, a third captain goes up in humility, falling on his knees, and asking for mercy. This man and his soldiers live.

Last century, Arthur Wallis – at the beginning of his landmark book, God’s Chosen Fast – wrote, ‘When people do not like the plain literal meaning of something in the Bible they are tempted to spiritualise it, and so rob of its potency.’ What was true of the church’s reading of passages dealing with fasting in the 1960’s, is true today of the church’s reading of passages regarding God’s violence.

When we look at passages where God sends physical judgement against men and women, we have a couple of sneaky ways of dismissing them. The first is the way of unbelief. We simply chose to believe that this unsavoury portion of Scripture is not true, that is was accidentally included in the Bible, or that it is not inspired by God.

Another way allegorising. This method is simple enough to employ. We say that Joshua invading Canaan is about us violently fighting the sin in our lives or that Elijah calling down fire on wicked soldiers is about letting God judge sinful passions when they threaten to take control of our attitude. Of course, we can agree that some of these imaginative readings of the passage may have some useful application. But it doesn’t change the original story, does it? God still executed these violent acts in real space and in real time.

A book by a well-known ‘progressive’ Christian thinker is proposing yet another way of dealing with these passages. He writes that God is allowing himself to depicted in this violent way so that humanity can see just how violent they themselves are – and be repulsed. He argues that God’s actions in the Old Testament are like the work of the cross in the new: we are supposed to see it and be appalled at our own violent sinfulness. If you’re having trouble getting your head around that this one, you’re not alone. In addition to being confusing, the whole thesis presumes that these judgements are morally ‘wrong’.

But there is a much easier way forward than by doing interpretive gymnastics. And that is by simply taking the Bible at face value – assuming that it actually means what it says. Like whisky, we should take it straight. Really, if a person with no church background given a Bible and read through it, do any of us truly believe that she would describe Scripture’s God as always being non-violent?

The problem is not with the Bible. The problem is with us. 21st Century Westerners have difficulty imagining a God who both violently punishes the wicked and who is also loving, compassionate, patient, and kind. In the gospels, we see Jesus being kind and gentle to many and we struggle to see how this is the same holy God of divine judgment. The fact that we have difficulty seeing how God can be both of those things at once is not our ultimate problem. Every culture and every generation has difficulty in understanding at least some aspect of God’s character. In the Middle East, it’s the Trinity. In India, it’s the exclusive nature of Christ. In honour bound cultures it’s forgiveness. The problem comes when we exalt our cultural values above the Bible and begin to find clever ways of dismissing the bits that don’t agree with us.

For some among us, the motive in doing so is the notion that belief in a violent God will produce violent people. But this is not the case. It’s precisely because God will judge and punish the wicked that I can be free from doing so. This is why Paul says, ‘avenge not yourselves, but rather give place for God’s wrath: for it is written, Vengeance is mine; I will repay, saith the Lord’. Because vengeance is His, it doesn’t have to be mine. He'll punish the wicked. And that frees me to be a peaceful person - I don't need to be an instrument of jihad.

One may say that we don't have the moral right to be violent towards others. Granted. But we are not God. God has the right to get aggressive in ways that we don't. He gives life, and he can take it back. And sometimes that offends a society that is stout on rights and lite on obligations.

The New Testament says that we are to ‘behold both the kindness and severity of God.’ When we dismiss one at the expense of the other, we get in trouble. There should be times – though not all the time – when the Bible is preached in a way that causes us to see God’s severity. This creates in us the attitude demonstrated by the third captain. We approach a God who punishes wicked people on bended knee. We don’t approach Him telling him about how good we are, what rights we are entitled to, or how he ought to be kind to us. We acknowledge that we deserve the same flames that consumed the others – and we humbly run to the cross and ask for mercy. For it is at Golgotha where judgement and mercy meet.