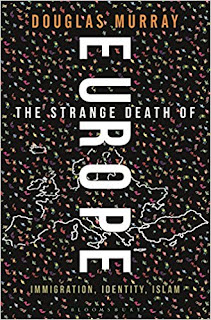 4/5 Stars. In many ways, this is an excellent book. If you want a book that gives a review of the social and political causes and impacts of recent immigration into Europe, this is the one. And I say that as an immigrant myself.

Regardless of your political stance or what you’d like to believe about immigration into Europe, it will be hard to argue with Murray’s research. The facts don’t care about our feelings and this book is filled with facts – many of which our feelings might not care for. His thesis is that Europe is committing suicide and one of its primary tools is through the unstrategic and (seemingly) unlimited immigration that has occurred in recent decades and – more importantly – in the last three years.

Those who may not like the facts that he presents may be tempted to paint him as a xenophobe or racist. He isn’t. He often shows how these policies aren’t particularly helping immigrants either and how genuine refugees who need our help the most, often aren’t getting it.

I found it interesting to read – not only as an immigrant – but also as a Christian. Murray himself is agnostic and his inevitable nihilism is felt throughout the book. To his credit, he's a lot more honest about it than most agnostics /atheists are.

He recognises that Europe could possibly receive millions of immigrants if its culture was strong. But Murray shows in many ways that it is not. He bemoans European shallowness, the fact that the European identity is currently so ill-defined, and our art is so hollow to what it once was. In the face of millions of Islamic immigrants who believe things strongly enough that they are willing to die for them – and a handful to kill for them – what can we call them to? What cultural richness can we assimilate them into that will cause them to want to truly become European?

Through the book, he describes how in the last century we have developed a culture of self-doubt and guilt – to the point of being ashamed we are European. He goes through the various signs of what makes a healthy and unhealthy culture – and we are unhealthy and unable to assimilate millions of immigrants well. In the end, Murray’s book is pessimistic. He gives no clear solution to our cultural (dare I say ‘spiritual’) malaise. He seems to think that in 100 years Europe will be Islamic. Much sooner in Sweden and Germany.

As Christians, we would probably agree that if Europe does not rediscover the gospel, then Murray is probably right. Nationalist parties will grow in popularity and the effects of unrestricted immigration become more visible. But it will be too late. Murray mentions Christianity, but he presupposes that it is no longer a viable option for thinking people. He assumes that textual criticism has dismissed the possibility of real confidence in the Hebrew/Christian scriptures. As a pastor who did his post-grad work in the hermeneutics of those Scriptures, I wish he would take a closer look.

As it stands, Europe’s future is dark. But if we see a movement of spiritual awakening to the gospel – one that sees millions of secular Europeans and Muslim immigrants repenting and turning to Christ – then that will result in quite a different story

For those of you who are Christians, if there was ever an hour in European history to fast, pray, and be bold with the gospel, that hour is here.
Email Post
Labels: a christian review douglas murray review of the strange death of europe