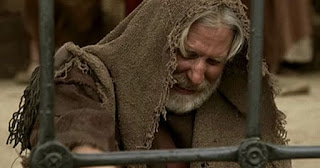 Last week, a major denomination here in the UK announced that they would begin to recognise homosexual practicing relationship as sacred marriage. Although this would have been seen as an unthinkable act for 99% of church history, this announcement passed with relatively little comment from church leaders of other denominations.

There was no blowing of trumpet horns, no ashes, and no beating of the chest. There were no tears. Other denominations and churches did not assemble to mourn as Israel did in Judges 21 crying out ‘Why, God, has Israel lost one of its tribes?’ It has happened before and is it assumed that it will happen again.

The apocalyptic witness of Moses and Elijah in Revelation 11 – whether we see their appearance as something past, present, future, or some combination – gives us a glimpse into the prophetic call of the church in several ways. One of these is the description of their clothing: that of sackcloth.

This is not surprising given the descriptions of Elijah and John during their times of earthly ministry. Elijah and John both wore garments of camel’s hair. Biblical commentator Joseph Benson writes of John’s appearance out of the desert, ‘Not, as some have supposed, a camel’s skin, raw and undressed, but a kind of sackcloth, coarse and rough, made of the raw long hair of camels, and not of their fine and soft hair, dressed and spun into thread.’

Whatever else scholars may conclude about the significance of camel’s hair clothing – we can know they weren’t party clothes. There's not much swag in sackcloth.

Christians are called to joy. We are called to laughter and to celebrate God’s goodness and the blessings he delivers to us. Churches should be the happiest places on earth. And yet, we are not only to be happy. We are to have compassion – and sometimes compassion weeps. We are called to mourn with those who mourn. And though we party with the angels when one sinner repents, we also weep when a righteous man hardens his heart and walks away from God. In heaven, all tears will be wiped away. But in this life, holy men will know seasons of sorrow.

If the church is to fulfil its prophetic mission, there must be a place in our Christian discipleship for sackcloth and fasting. Throughout the Bible, fasting was an activity that people undertook to humble their bodies and souls and to mourn before news of tragedy and judgement. It was understood that when bad news came, it was often appropriate to put a meal to the side and go be with God to weep.

On a merely natural level, Westerners have grief issues. We do not mourn thoroughly at times of disaster and often find ourselves much later having to psychologically process our losses – sometimes with the help of a therapist. Other cultures have better recognised that time and space needs to be given for a soul to process bad news and that fasting helps us do this.

If we are to spiritually grow to the place where we can be entrusted with a message of repentance, we must have a sensitivity to that which grieves God’s heart. Yes, we must also learn to gratefully celebrate his goodness. But there will also be times when we mourn and fast – not only our personal tragedies – but that which is tragic to the name and glory of God throughout the earth.


If the church is to speak words of fire, it must first weep rivers of tears.