An Alien Christmas on a Theologian's Toilet 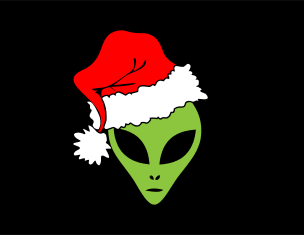 In the Spring of 1517, a theological professor went to the crappers. While doing his business, he had an explosive breakthrough.

Possibly more than one.

He was teaching through the book of Romans at the local University and he was puzzled over an issue. Though possessing a sharp mind, a degree in Law, and a doctorate in Theology, he was still struggling to make sense of what St. Paul meant when he wrote about ‘the righteousness of God’.

This was more than a moot point for the North German theologian. He had trembled his whole adult life with the question of how a disgustingly sinful man―such as himself―could ever be good enough to stand in the presence of a thrice-holy God and not be killed. It was while on the john that he had a revelation that caused his heart soar in pure spiritual ecstasy and liberation―and which takes us to the heart of Christmas. What was that revelation?

Or, to be more precise, ‘the alien righteousness of Jesus’. Martin Luther had been exceedingly scrupulous as a monk. Yet he always sensed that infinite qualitative difference between him, as a sinful man, and God. While doing his business that spring day in 1517, the penny (among other things) dropped. The monk got woke. He finally understood what Paul had been on about and why Jesus came to be born as a human in the first place.

He came to give us His righteousness.

For our sake, God made him to be sin, who knew no sin,
so that in him we might become the righteousness of God.
-II Corinthians 5

In the cross of Jesus, God’s righteousness―a righteousness wholly foreign and alien to our wicked world―invades our planet with a force and fury that makes every other blitzkrieg look like a Spanish tumbleweed. Jesus takes us in our sin and filth and makes us righteous and acceptable to God. His Blood washes us, making us clean.

This is True Christmas. As nostalgic as the season may be to many in the Western world, human sentimentality does not make us righteous. We can baptise ourselves in mulled wine while singing the hymns of Bing Crosby and Cliff Richards yet still sink in our damnables. Many Westerners may very well look to our modern Christmases with all the eagerness of a Weinstein before a new round of actress interviews. They count down the days to the 25th of December as a day of redemption for their otherwise empty lives.

Yet, for all this anticipation, many still suffer from post-Christmas blues. Many feel as if Christmas has somehow let them down. It lets them down because they were looking for a Saviour―and they were hoping Christmas would redeem them. Christmas makes a terrible god because Christmas cannot save. Most people only know Fake Christmas.

But True Christmas can point us to the One who can. God’s righteousness did not cross the borders of Heaven and come to Earth in a golden chariot to be welcomed by the ruling elite in Rome or the enlightened rulers of China. God’s alien righteousness came screaming and bloody, exploding out of a virgin’s vagina in the hillbilly backwoods of the Roman Empire and placed in an animal’s feeding trough.

This is why Luther’s personal rediscovery takes us to the very heart of Christmas. God’s alien righteousness comes down in the midst of our unrighteous crap. The biggest scandal is not that the holy babe was put in a manger that smelled of sheep drool and donkey farts. The biggest scandal is that God’s righteousness comes into our even filthier lives. Our lives―you know, those things that begin with glorious vision yet somehow seem to unravel into incoherent chronicles of ineptitude, arrogance, and sheer dumb-assery.

Yet, it’s into our lives that He comes. It’s not the healthy who need a doctor, it’s the sick―and the filthier we are, the more inclined He is to come. He comes for those who know they the worst of sinners―not for the self-righteous who spend all their time decrying the repugnant cultural other on social media. He comes for those who know that they, themselves, are the problem.

Mild, He lay His glory by
born that men no more may die

The ugly wooden manger was announced by the angel as ‘a sign unto you’. It is a sign because it points beyond itself to an even uglier wooden cross. The baby who shepherds see drinking milk from a broke, teenage girl will one day drink damnation dry. And this righteousness, one that is wholly alien to us, becomes the only gift that really matters.
___________________

For more on being righteous in a crappy world, check out Elijah Men Eat Meat: Readings to slaughter your inner Ahab and pursue Revival and Reform (Get Here)
Email Post
Labels: Alien righteousness Christmas martin Luther