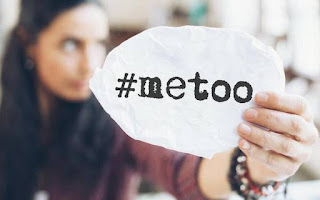 The first book of the Bible has a few #MeToo moments recorded in its brutally honest pages. And, as our church is going through Genesis, I am preaching them all. This means I tend to think about these accounts more than when I just read the book for myself.

This is at a Post-Weinsteinian time when the #Metoo and #ChurchToo movements are burning like a Southern California Autumn all over social media. The story of American pastor Andy Savage has helped add extra fuel to the flames this week alone. These hashtags accompany stories of sexual assault―victim stories being brought out of the closet. And, like most emotion fuelled movements, there is both good and bad that comes of it.

Dinah
In Genesis 34 we read of Dinah’s #MeToo moment. While her family was still somewhat new in the neighbourhood, she went out to meet some of the other lasses in the area. It is recorded that Shechem, one of the princes of the area, saw her and sexually assaulted her. She comes back home and tells her dad, Jacob, what happened. What does this Father of the Faith do?

The story goes on to explain how, amidst Jacob’s sinful inactivity, her eleven brothers come up with a plan to get revenge on those responsible. It was an honour killing that went to the extreme. Many people who had nothing to do with the actual assault lost their lives.
What can we learn from this account?

First of all, the text places no blame on Dinah for what happened to her. Moses, in recounting the narrative, never blames Dinah. Her choice of clothing is never mentioned. There’s not even a hint of her ‘asking for it’. Shechem is the guilty party and he should be punished for his actions. There is never an excuse which justifies crude behaviour much less sexual assault.

Secondly, we might ask how Dinah got into such a vulnerable situation to begin with. But this is not to ascribe any blame to the young girl. At the most, she would be guilty of the same youthful naivete that accompanies almost all at that age. The narrative implies that it was Jacob who had failed in his patriarchal duties. Remember: this is not your typical English village she wandered into. This was the Ancient Near East. There was no rule of law like we now know. This was a land where might was right. Why was a pretty teenage girl (who had elven brothers!) so unprotected at such a time and in such place as that?

What’s certain is that Jacob was not being the father he should’ve been. Dinah was hurt because of an absence of healthy fatherly oversight. It is negligence, not excessive patriarchy, that is to blame. Jacob failed to guard and protect his daughter’s feminine innocence before the assault and he then failed to seek justice after the event. He utterly failed to be the patriarch God had called him to be. The father’s self-centred negligence was the soil from which pain and injustice grew.

Lastly, Dinah was right to tell her story. This is perhaps the best thing that might come out of the current #MeToo and #ChurchToo movements: churches being environments where we can confess both our sin and the hurt of being sinned against.

It is tragic that Jacob doesn’t act on Dinah’s story. Because of his inaction, Dinah’s brother’s sought justice―but without wisdom or moderation. Like today, when victims do not get the justice they deserve, youthful and inexperienced mobs can be whipped up to go and pursue justice themselves. In the process, they do far more harm then good. When those in authority fail to act justly, there is always a void left. That void is not always filed with good things.

Potiphar’s Wife
The next story is that of Joseph in Genesis 39. In this insistence, the accused man was the victim. A scorned woman didn’t get what she wanted and so falsely claimed the #MeToo tag for herself. The emotional fury that was provoked by her accusation landed the innocent Joseph into a prison with a life sentence.

What can we learn here?

First, we cannot always be certain who the victim actually is when an accusation surfaces. It’s easy to get passionate over a perceived injustice. It takes time and the exercise of wisdom to examine actual evidence and hear both sides―something that Mr. Potiphar fails to do (like most people). If the woman accusing the man is telling the truth, then she is the victim. If she is lying, then the man being accused is the victim.

[Though not directly related to the text, it should be kept in mind that men can be victims as well. And we don’t just mean in the sense of being falsely accused. We speak of sexual assault. Men get raped too. I remember one young man I pastored confessing to me how he had been raped by a group of other young men. He felt incredibly ashamed of what had happened to him and for that reason had been silent for years. Most male rape victims never admit it. It is perceived it as unmanly to be the victim. There is yet to be a #MeToo movement that most abused men feel they can claim as their own.]

The Joseph account also teaches us just how much we need cautious wisdom for times like these. It’s easy to jump on a bandwagon. That’s why Christians need to resist the mob mentality and look at each situation individually. Stoking the fires of perceived injustice among followers online is a lot easier than cultivating a mature gift of discernment.

Lastly, there is redemption. As Summer White wisely pointed out (HERE), our hashtag is #MeToo AND #ButGod. Our abuse does not define us. He can reach down into our pain and bring healing and beauty. Joseph’s false accusation and prison sentence was not the last word. God was with him.

What abusers mean for evil, God can use for good.

As with every social trend from BLM to Brexit to The Trump Train to #MeToo, we should resist the impulse to get completely caught up in blind enthusiasm―either 100% for or 100% against. All earthly movements are an incongruous compound: all contain potential both for good and for harm. In typical human fashion, they do both to varying degrees. As a prophetic people, it should be our goal to speak to the good and resist the errors―even in the best of them.
___________________