The Case for Hate Speech

When God created humans, He created them with the capacity to blaspheme. It is a capacity that mankind had made much use of throughout the millennia. Today one does not need to look far at all to find robust examples of God’s character being mocked and his Son being insulted.

The tongue exists to reveal the heart.

Sadly, mankind thinks it knows better than God. When Christianity was a dominant ideology in Europe, blasphemy was a punishable offence. Thinkers like the French critic Voltaire fought against these laws that made the church (primarily the Roman Catholic Church) impervious to criticism. He used his witty and sarcastic prose to mock the moral inconsistencies of powerful church leadership―something that was dangerous and taboo at the time.

I disagree with Voltaire on some issues. I find some of his comments blasphemous, offensive, and needlessly harsh. Yet I dearly want to live in a country where people like Voltaire can articulate their offensive comments without fear of imprisonment. One quote that is often (mis)attributed to Voltaire is worth reflecting on:

‘I disapprove of what you say, but I’ll defend to the death your right to say it.’

If someone hates Christianity, I want them to have the freedom to say so. I would appreciate it if they expressed their disagreements in a way that I find respectful. But we know that all disagreement over things we hold precious may feel uncomfortable at some level. Sometimes to make a strong point people may wield acrimonious language in fierce protest. I would rather them speak hateful words out in the open against Christianity than to only contemplate those ideas quietly out of fear.

Give me more Hate Speech 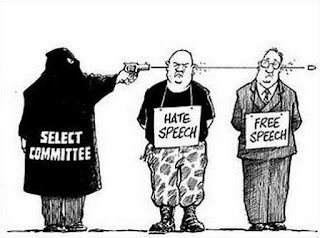 Let those who hate my faith (or any other system of religious, social, or political belief) say so. Turn the cameras on us. If we can’t defend and debate our beliefs and values against mockers and haters in the free public square, perhaps they’re not that great to begin with. Maybe we need to shop around for some new ones.

Am I glad that people express their thoughts in immature or crude ways? God forbid! I wish everyone was slow to speak and quick to listen to their ideological opponents. It would certainly be good if our civil discourse was more, well, civil. But who decides what's civil and what's not civil? A government committee?

History has tried that. It hasn't gone down well. The body count is high.


I Accept Rude Speech Against Me and My Faith
I want people to respect the Christian faith because they come to know Jesus as Lord. Not because I coerce them with legal threats. We should not want people to mock the God we worship. But how we get that verbal respect is important. Do we win hearts and minds through persuasion? Or, do we criminalise criticism?

The liberty to offend is foundational to any free society. Sadly, here in the UK we are letting this liberty, that men and women spent centuries fighting for, slip away. Britain was once a matchless beacon of Free Speech. She was the home of men like JS Mill, that great father of Classical Liberalism. She was the home of the famed Speaker’s Corner in London―once the global epicentre of Free Speech. Will we now let Britain enter into a post-Freedom of Speech era? What political party currently has freedom of expression as part of their platform? 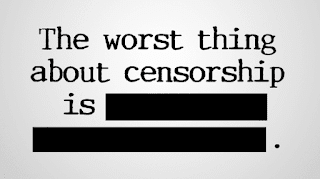 Increasingly in Britain, more and more groups are getting a special status that protects them from the type of satirical criticism that Voltaire, Martin Luther and many other shapers of Western culture once wielded. To do so now brings one under the condemnation of the ‘Hate Speech Laws’―vaguely written enough to leave it up to the magistrate to determine how and to whom they are applied. These laws are notable because, unlike other crimes here in Britain, intent to commit a crime no longer has to be proved. Offence just has to be taken.

As a Christian, I may want people to speak respectfully of what I hold dear. But I should resist any law that would make it criminal if they don’t. One day we will all give an account of every word we’ve ever spoken or tweeted to the One who spoke the Universe into existence. Hateful words and foolish speech will not be allowed to continue forever.

But I am not that Judge. This is not that Day. And attempts by government bureaucrats to bring it about early results in bad news for those not in power.
(Download a FREE e-copy of our book: Elijah Devotional)