Why Am I Still Protestant? 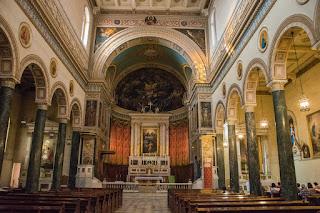 GIVEN THE SICKENING STRAIN of Protestantism that so often makes the headlines here in the UK, it's only fair for me to respond to the question about why in the name of the Virgin Mary that I'm still Protestant.

Let's get perspective first. There are three movements that are often seen as the historic branches of Christianity: Orthodox, Catholic, and Protestant.

Unlike the Mormons, Jehovah’s Witnesses, and other modern and classical sects, these three branches all affirm the foundational doctrines of the Incarnation, the Trinity, and Eternal Judgement. Since we live in a country with freedom of religion (diminishingly, but still relatively so) why have I chosen to pitch my tent on the Protestant branch?

Voluptuous Heresies
First of all, let me fully acknowledge that the last 100+ years have given us plenty of good reasons why myself and many other Christians might want to jump off the Protestant branch. Voluptuous heresies have emerged in the last century that have chased out plenty of God fearing people.

One of my favourite authors, GK Chesterton, was such a one. He saw the Church of England capitulating to the fashionable ideas of modernity last century and fled for safety in Catholicism. And the CofE is not alone. Of the three branches, only Protestantism―or much of its Western expression―has opened its doors to feminism and LGBT ideology in a way that the other two (older) branches certainly have not.

By contrast, five hundred years ago the Reformers were crying ‘ad fontes!’ (back to the sources) and were making copies of the Bible available to people from the original Greek and Hebrew. They placed the salvation of their souls on the idea that every word from God is faithful. Fast forward five hundred years: we have Archbishops punishing ministers for NOT doing gay weddings and sending envoys to the Vatican who don’t believe in the physical resurrection of Christ. We’ve traded in our Ulrich Zwinglis for Nadia Bolz-Weber and our Martin Luthers for Justin Welby. Burning the guy at the stake who brokered the deal shouldn't be off the table.

All this to say, during the last five hundred years, much of Catholicism has gotten better while much of Protestantism has gotten worse. The Orthodox, as always, have stayed the same.

So why am I still Protestant?
Here are my reasons.

First, I still think the historic Protestant creeds give the clearest articulation of the forgiveness of sins while the Catholic and Orthodox faiths are still a bit fuzzy on this one. Protestantism gave us clear gospel preachers like Billy Graham who helped countless people clearly answer the 2,000 year old question ‘What must I do to be saved?’ By contrast, while the Orthodox, who have much good to say about the Incarnation of Christ, have little to say about his atoning death for sin.

Secondly, there is still something to be said for seeing institutions as things that are only fit for purpose. I’m a Congregationalist pastor. Should our Congregationalist church group no longer clearly teach and preach God’s word, please move on to another institution that does so more faithfully. We are not sacred, God’s Gospel is sacred. We do not teach the Gospel of the Church, we teach the Gospel of the Christ.

By contrast, Catholicism and the Orthodox churches see their institutions as sacred in a way we don't. There is a sense in which, if you aren't part of their institutions, you are not part of the ‘real’ church. A Catholic may not question your salvation, but she may well be praying for you to come back home to Rome. Anglicans (though often seen as Protestant) also have a doctrine of Apostolic succession that can be interpreted along these lines.

This is an important question. I’m exuberant that the current Pope encourages all Catholics to read and study the Bible. But the question remains: what if the next Pope doesn’t think this is a good idea. If future Popes think Bibles should be burned again or that polyamorous marriages should be standard practice, then what? 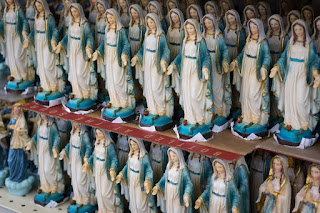 I realise that some faithful Catholics may think I am oversimplifying the matter. And perhaps for brevity’s sake I am leaving out some of the nuance. Fair enough. Chalk it down to me wanting to reduce my blog's carbon footprint or something woke like that.

Yet my understanding of Scripture is one that does not identify the Church with an institution. In Revelation Jesus tells various churches that if they are not faithful, he will remove their lamp-stand. He says that old wine skins must be discarded if they can not hold new wine. True apostolic succession is not manifest in various ceremonies involving the laying on of hands. Apostolic succession is manifested by apostolic success.

But the CofE and Lutheranism isn’t the whole picture of Protestantism. While the historic European branches of Protestantism have compromised themselves with modern and woke ideologies, around the world a robust Pentecostalism has transformed the global Christian landscape. The future centres of Christian influence are not Europe or North America. It’s the red hot churches of Africa and Asia that is the trajectory of Christianity. They manifest a faith that, while decidedly not European in flavour, is based on the study of Scripture and calling people to forgiveness through a simple faith in Christ. Something I believe the original Protestant Reformers would’ve been glad to see.

The Glories and Perversions of Each
Each branch of historic Christianity has it’s glories and its perversions. The Orthodox have a glorious vision of holy and heavenly worship but often fall into the ugliness of nationalism. Protestantism has historically called people to the Scriptures and faith in Christ but too often flirts with modernity and the trendy cultural ideas of the day.

And the Catholics? Well, I’m grateful for how they evangelised much of pagan Europe (see St. Martin) and have held strong on the Trinity, the Incarnation, the Resurrection and have stood against popular modern ideals. Yet the current child abuse scandals, the lack of clarity of how exactly one can be assured of salvation, and questions I still have about prayers to Mary, the saints, and the nature of the Eucharist still lead me to conclude that there is still room to remonstrate for reform - just like in the other two branches.

Given the current dog poo doctrines floating around some Protestant denominations, I see why some believers jump over to Catholicism and Orthodoxy. Our own house is not in order, how can I object?

Yet I still find few things as faith building as the historic Protestant confessions. Take this one from the Westminster confession:

Q: What is your only comfort in life and death?
A: That I am not my own, but belong with body and soul, both in life and in death, to my faithful Saviour Jesus Christ. He has fully paid for all my sins with his precious blood.

For more on the need for Reformation in the church, please check out Elijah Men Eat Meat: Readings to slaughter your inner Ahab and pursue Revival and Reform