Is Katie Hopkins the Anti-Christ? 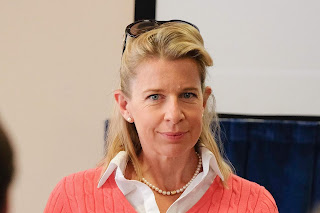 PREMIER CHRISTIAN, THE UK'S LEADING Christian magazine and one that publishes many fine articles, has now published 'Why Katie Hopkins is Wrong about Christian Culture' by Abby King. The supposed goal of this article is to convince us that a tweet from Hopkins misrepresents Christianity―thus protecting us all from nasty nationalist wrongthink. (For our non-British readers, Katie Hopkins is an English gal who tweeters out political verbiage on immigration.)

The idea that Hopkins might not be a fully orthodox Christian theologian hopefully isn’t shocking. Most of us would be surprised if she did tweet out the Apostles Creed or a balanced theological reflection of atonement theology. It is not so much that someone might point out a deficiency in Hopkins’ understanding of Christian doctrine that we should take issue with, but rather that the article doing so seems to be at least as probelmatic as the original tweet.

“Call me what you wish. Islamophobe. Bigot. Racist. Vile. It matters not. What matters is the fight back for our Christian culture which we so desperately need to defend.”

Vagueness aside, this shouldn’t be too controversial among Christians. Admittedly, Hopkins fails to define what she means by ‘our Christian culture’. But Hopkins’ lack of a definition doesn’t stop the article from presenting its own presumption: Hopkins’ Christianity is (supposedly) ‘where we sing Jerusalem; hark back to the glory days of the Empire; and imagine God as an old, white man who, as novelist Anne Lamott would say, hates all the same people we do.’

And, voila! With that insertion, Hopkins suddenly becomes the Anti-Christ.

If Premier is right in its presumption about Hopkins, there is good cause to disagree with her. Sadly, this article doesn’t give us anything in Hopkins’ own words to go by. Such omissions are usually tactics used in hit pieces rather than articles published by respected Christian organisations. Instead of quoting the person’s own words, the article inserts presumptions that scurry through our minds like hungry rats across a dirty floor.

Where is the Love?
This sad irony of this article is that it claims, in all seriousness, to argue for charity to be given to people different from ourselves while at the same time interpreting Hopkins’ original tweet in the most uncharitable of ways. The article implies that if Hopkins really understood what being a Christian was all about, she too would follow ‘in the footsteps of a brown, Middle Eastern rabbi.'

This is the polite, Christian way of calling someone a racist.

The article quotes from Greg Boyle who says that the true Christian values are ‘inclusion, non-violence, unconditional loving kindness and acceptance.’ Throw in a bit of ‘smash the patriarchy’ and you’d have all the professed values of most young 21st Century Western progressives. The article speaks about the need to show unconditional love and kinship to everyone―presumably everyone except Hopkins!

Later, the article finally begins to engage with Hopkins’ own words when it says ‘Rather than setting out to defend our values, as the Church we are called to embody them’. But what does this rhetoric actually mean? What does it mean to embody values without also, at the same time, defending them in the face of hostility and compromise? The article is setting up an unnecessary dichotomy. The presumption is that, if you wish to defend your values from challengers, then you are probably not living them out. Is this really necessary?

The Poor Bomb
But then the bomb drops. The article argues that, ‘Jesus came to bring good news to the poor, which invariably means bad news for those who are used to having wealth and power at their disposal.’ Bam! If you’ve got a successful retirement account or a bit of political influence, you might have less hope than a goose at Christmas!

What this bit of anti-hierarchicalism has to do with anything that Hopkins said is unclear. It’s an act of impressive gymnastics to argue for total inclusion in one paragraph and then exclude everyone middle class and richer in the next. When Luke, in chapter four, records Jesus as announcing that he’s bringing ‘good news to the poor’, he was not damning everyone who makes over a certain amount every year. Let’s remember that Luke’s gospel is dedicated (and probably paid for) by someone fairly high up in Rome’s socio-political hierarchy.

If Jesus isn’t damning the rich, what exactly did he mean?

There has been some diversity of thought throughout church history. The early Church Father Origen says that Jesus, in his Luke 4 sermon, is referring to, ‘the Gentiles, for they are indeed poor. They possess nothing at all: neither God, nor the Law, nor the prophets, nor justice and the rest of the virtues.’ Cyril, another Church Father, also commented on this passage that Jesus ‘preached the kingdom of heaven to the heathen. They were poor, having nothing… he preached it to those who were without spiritual riches.’

The great German reformer, Philip Melanchthon, was more willing than the Church Fathers to consider that Luke’s use of the word poor (Greek: ptōchos) could include the concept of economic destitution, but that it shouldn’t be understood only in the material sense. He writes, ‘It should also be understood that poverty does not praise itself as the monks imagine…Do the poor by their poverty merit the kingdom of heaven? No!’  In other words, people aren’t more holy just because they’re broke. There is a spiritual dynamic at play.

Inclusivity...for Some
The article ends with, ‘Perhaps it means there are parts of us that need to die too: our prejudices, our selfishness, our moral outrage, our judgement of those who are different from us. Perhaps it means we need to accompany those in our own communities who live on the margins: our gay colleague, our disabled family member, our immigrant neighbour.’ As a non-UK ‘immigrant neighbour’ myself, my family and I would welcome any acts of kindness we can receive from our British neighbours.

But, based on how this article refers to Hopkins, I wonder those who are quick to agree with it realise the full scope of what they are endorsing. To give up ‘judgment on those different from us’ may involve them showing love to their colleagues who endorse gay conversion therapy, a neo-Nazi family member, and their EDL neighbour. We should share this article’s desire to not see the name of ‘Christian’ hijacked by conservative politics. We should also have a desire to not see hijacked by left-wing ideals.

This article, in exalting the value of inclusivity, says that Jesus ‘identifies so strongly with the image of God he finds in other people that he is able to tell his followers - any time you’ve done it for someone else, you’ve done it for me.’ Nice words. I wonder, will that ‘someone else’ include Katie Hopkins?