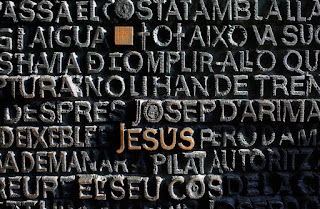 ‘The Word became flesh and made his dwelling among us. We have seen his glory, the glory of the one and only Son, who came from the Father, full of grace and truth.’
-John 1.14

WORDS ARE THE STUFF of magic. Every sentence has the potential to be a spell and every expression an enchantment. It was with His words that the Father created the heavens and the earth. It was with words that Adam took dominion over the animals and constructed a song of welcome for our beautiful mother. It was with words the Serpent seduced Eve into the suicide of sin and with which our parents blamed others for their own treachery.

Our history since Eden has been one of warped words.  We violate verbs, abuse adjectives, and pervert pronouns all in futile attempts to justify our existence, excuse our sin, belittle others, and create and spread lies. We blaspheme the Storyteller and try to hijack His-story so that we can place ourselves at the centre of it.

Words create worlds; and we have made some pretty poor ones with ours.

When the Storyteller sets about to remake the world, He sends in His own Word to do so. Not just his ‘words’―as He did through Moses and the prophets―but his ultimate Word, the Word that is His very self. This Word tells a story that unravels all of humanity’s dark sorceries. This Word is Good News that conquerors our countless centuries of Fake and Fearful News.

At Christmas, we recognise that this Word became flesh. The dream became reality, the myth became history, and a gift greater than our powers to imagine or appreciate was given. The Storyteller got written in. The director took the stage. God became a baby. The Ancient of Days was once eight minutes old. And something bigger than the whole of our Universe was placed inside an animal trough.

No earthly storyteller would dream up such unfathomables. It would seem too incredulous or too blasphemous or both. It is a tale of goodness stretched to a seeming insanity. But the story continues.  We must ask, why was this Word wrapped in baby flesh?
So that one day it might be pierced and torn off of Him.

The Truth had to die for liars―and the Word was buried while bearing all the twisted tales that this terrestrial ball ever told. All so that the narrative of His-story could be redirected and a villainous humanity reborn.