Is the Corona Divine Judgement? 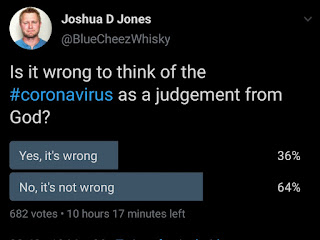 ‘Is it wrong to think of the Coronavirus as a judgement from God?’

That may seem like an odd question at a time when we are all trying to cheer each other up. Initially, it may sound negative. But it’s a question that leads somewhere decidedly good.

I put the above question out to the boys, the girls, and the strange creatures of Twitter yesterday. Within fourteen hours 700 had responded―far more than usual. The results surprised me. 64% responded that such thinking was not wrong with 34% taking the opposing view.

Judgement is more popular than I had supposed.

What does the Bible say?
To be sure, the God of the Bible certainly does send judgements on the world. Christians nowadays downplay these judgments. We mumble, roll our thumbs, and squeak out something about God going through an awkward phase. But God is not shy in taking credit for these reckonings. Remember that story of Noah and the Arc back in the book of Genesis? The one with all the animals we tell to our kiddos? Yeah, it was God who sent that flood and drowns them all. Yikes. And though no other judgement in the Bible ever matches that flood in terms of severity, there are other, smaller catastrophes that God seems to take credit for, particularly in the Hebrew scriptures―what most Christians call the ‘Old Testament’.

Why?
Contrary to popular understanding, God doesn’t do such things because he gets moody or hormonal. His judgements, when they do come, are decidedly different than the outbursts that we humans have and they’re different in at least two ways. First of all, they are a long time building up. His judgements aren’t angry, knee-jerk reactions like the ones we get when the person behind us in the TESCO check out line coughs (you know who you are). Rather, the judgements that come on nations in the Bible often have a build-up of about 100 years or more and are repeatedly warned about by a series of prophets who are often dressed as grungy hillbillies like the boys sitting on the porch in the film Deliverance.

Secondly, His judgements are not mere actions of revenge in the way we humans tend to get back at one another (I’m still thinking about you Cough Man). In the Bible, God’s judgements have instructive purposes. He judges Egypt, after many warnings, because He’s trying to teach them about who He is and that it’s wrong to enslave a whole race of people. Often divine judgements come upon God’s own people of Israel because they are oppressing the poor or giving themselves over to idolatry, greed, and adultery. Isaiah the prophet, in about 700 BC reflecting on these issues wrote ‘When your judgments come upon the earth, the people of the world learn righteousness.’

The New Testament
When we get to Jesus and the writings of the New Testament, we see a change of focus. The thought of God sending judgements on the world is never denied. In fact, it’s somewhat presumed. But, the future Day of Judgement aside, it is not talked about much.

Now, in this story, the storm is simply acknowledged as being there. Storms come into our lives: to the clever and dummies alike. Jesus doesn’t focus on where the storm came from, whether it was a divine judgement or not. He simply says that it came. The focus is on how you are building your life. Are you building your life on things that will endure? Or, does your life have an attractive exterior but weak foundations?

And this is the emphasis of the followers of Jesus after his resurrection and the beginning of the church. It is recorded in the book of Acts that a major famine swept through part of the Roman Empire. People ran out of food much like TESCO at the moment. During this famine, the church is never recorded as sitting around speculating on whether it was a divine judgment or not―something that could be easily done considering how wicked and oppressive the Romans were. Instead, the early Christians focused on how to respond to the famine: by taking up collections for the poor. They sent their food, money, and toilet rolls to where it was needed.

Maybe it was judgment, maybe it wasn’t. What difference does it make? Either way, we are to respond with mercy to those in need.

Our Judgements
This is not to say that judgment is never mentioned in the New Testament. But, when it is, it is usually done in one of two ways―both of which are radically personal. First of all, when spoken of it is often done in regards to THE Day of Judgment, the one which takes place at the end of human history. This is when all the fireworks go off and each person is judged according to what they have done or not done. It is the final assessment of our life’s worth and it is an event that should cause us to sit up and pay attention.

But the second-way judgement is talked about is different. The focus of Jesus good news, the ‘Gospel’, is that he has taken the ultimate divine judgement upon himself. On the cross, he accepted the punishment for human evil so that sinners like you can be forgiven and made new. He loved us by judging our evil on himself so that one day he could destroy all this world’s evil without having to destroy you and me.

Corona?
So, is the Coronavirus a judgment from God? Maybe.

Maybe there is something we can learn from all this and become a better, wiser people. After all, God’s judgments are always meant to point us in the same direction if we’re willing to listen: turn back to your Creator from your empty way of living, treat people justly and place your life’s trust in God’s good salvation.

Listen and pass the loo roll.
(Download a FREE e-copy of our book: Elijah Devotional)