Recovering from Biblical Manhood and Womanhood by Aimee Byrd (a review) 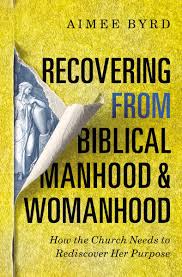 I MAY BE A LITTLE late to the party as my social media feeds were a flurry with comments about this book at least a month ago. But, on this rare occasion, my tardiness may be somewhat justified: I only just received the book in the post last week (Disclaimer: I received the book for free from the author for an unbiased review).

Considering the controversy the book had seemed to garner on social media, I was surprised to find the book not particularly controversial. You would’ve thought she was Rob Belling it. But I didn’t find that to be the case. Yes, the title gives you the expectant taste of denunciations. But little is actually denounced that anyone in my circles would care to uphold. This is why I am surprised that the book received so much attack from the few, the proud, the more-or-less appalled at everything we don't agree with crowd.

And this may be a cultural thing. The sorts of ‘Biblical Manhood and Womanhood’ that Byrd critiques is simply outside my experience. My experience tells me that Americans, by contrast to reserved Brits, tend to take issues to greater extremes―so I give her the benefit of the doubt and not assume she is strawmaning or inventing a boogeyman debating opponent.

Though I am in a ‘complementarian’ Christian denomination here in the UK, I don’t know any churches that take this authority/submission concept to the lengths she describes. She describes churches that teach that all women should be submitted to all men (p105) and churches where:

Whenever a strong woman is portrayed in Scripture, teaching or leading a man in any salient way, the popular explanation is often that God is making a point that there were no good men at the time. (p57)

Shocking quote! Just where is the Oxford comma?! Americans. Oh, yeah―the idea that God only uses women because there are no men around is also ridiculous. Only in my circles, such a concept isn’t ‘popular’. It is unknown. I'm not saying such churches don't exist on this side of the Atlantic, only that it's outside my sphere.

The book touches on a variety of subjects. Her dealing with the nature of discipleship and parachurch organisations was interesting. If some of my British reformed brothers and sisters would be unsure of what to make of the critiques in the first part, they would surly amen Byrd enthusiastically in this section. She makes a strong case for discipleship being the corporate work of men and women in the local congregation. This could’ve been a book on its own.

What did I enjoy most? I found her questions around the publishing and marketing of women’s devotional and Bibles to be more than fair. Most of all, I appreciated her engagement with non-Evangelicals who also hold to a complementary view of the sexes without centring this complementary on the authority/submission dynamic: Pope John Paul II, Sister Prudence Allen,  Paul Zancanaro, etc. My biggest critique is there wasn't more of this as it was my favourite bit. Very few Evangelicals know how Eastern Orthodox or Roman Catholics understand gender dynamics.

Byrd is a gifted writer, so the book is not hard to plough through. Otherwise, I felt like a bit of an outsider in some parts. The book is certainly not 'feminism' or even 'egalitarianism'. It is a critique of some applications of a strand of complementarianism. Fair play.
(Download a FREE e-copy of our book: Elijah Devotional)