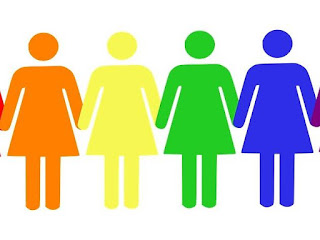 ‘I do not permit a woman to teach and have authority over a man.’ -1Tim 2
‘Wives, submit to your husbands. Husbands, love your wives.’ -Col 3
Feminism and LGBTism in the Church
If you didn’t burn the book after the last reading, well done. Perhaps you are a Feminist who has dared to go outside your echo chamber by reading this―that’s exceptional. At least you are open-minded enough to explore relevant questions and objections to your beliefs. Well done.
Here is another question: Why are the denominations that embraced Feminism a generation or two ago now being invaded by LGBT activism but not the ones that didn’t? Earlier this year, it was the URC who marked their 100th anniversary of ordaining women with a call to all churches to start ‘marrying’ gay couples. There is great pressure within Methodism and CoE to do the same.

If you identify as an ‘Egalitarian’ who also embraces the historic, Christian understanding of marriage between one man and one woman, ask yourself why Complementarian or Patriarchal denominations have so little internal trouble in resisting the pressure to capitulate to LGBT activism while the TF ones (CoE, URC, Methodism, etc) are struggling to stay faithful on this point? Why do you think that is? Not only have FIEC, New Frontiers, Roman Catholicism, AMiE, Eastern Orthodoxy, large segments of Pentecostalism, and other non-Feminist denominations generally avoided the huge drop in attendance over the last few decades (some have actually grown) but they are not being overrun by Rainbow Jihadis either.

Could it be that the same questionable hermeneutics used to dismiss passages that support gender roles in the church and the home are now being used on marital relationships? Some think so―and it is worth publicly discussing the issue. Let’s have some fair and open talk on the connection.

Perhaps TF’s most devastating legacy is that, just like John prepared the way for Christ, so TF prepared the way for something bigger than itself. TF has prepared the path for LGBTism. Denominations that were infected with this ideological virus are now faced with the next logical step. ‘Since a woman can be a bishop or a pastor, why not a husband and father too? Why can’t a man be a wife or mother?’ The questions are fair. If we base titles only on perceived ability―with gender never being a factor―why bar a woman from being a husband or dad if she claims she can do it? Isn’t that ‘gender discrimination’?

Yes, it is. And the churches in the UK, USA and the West are in great need of godly gender discrimination once again. This does not mean we value one gender above the other. To discriminate (from the Latin discriminat : to distinguish between) means we are able to discern the unique beauty and calling God has put in us respectively as men and women. When we can discriminate between the genders in a godly way we can see why the Biblical view of marriage makes sense. It is a sacrament pointing to Christ and his church. Marriage was created―not just to give us romantic goose bumps―but to give humanity a picture of the gospel.

Denominations that did not give into TF a generation ago are not being divided by the current winds and waves of queer theology. The ones that did are now wrecked by its legitimate ideological heir.

Come back Peter, Come back Paul
LGBT theological activism is not an overwhelming, internal issue for most professing Christian denominations. It is not an internal issue because most denominations are not intoxicated by the wine of Feminism. Out of the three branches of Christianity―Catholic, Protestant, and Orthodox―it is only Protestantism that has opened itself to Feminism to this degree. Catholicism and Eastern Orthodoxy (for whatever other theological problems they may have) have at least resisted this modern impulse. It is only a segment of Protestantism that has experimented with TF―though this segment is disproportionately larger here in the UK than it is in many other nations.

In our quest for revival and reformation, at some point we will need to go back to what Paul and Peter said about gender roles and sexuality in their epistles. We need to see what commands they gave to men and what commands they gave to women―and we need to take them seriously. Instructions were given to husbands or to wives. They were rarely given to spouses generically. The Bible could have given us instructions for clergy spouses. But it doesn’t. It gives us instructions for elders and elders’ wives.

To love the widow and her son well, Elijah did not have to become a Feminist. He needed to be a friend.

Extract from Elijah Men Eat Meat: Readings to slaughter your inner Ahab and pursue Revival and Reform (Get Here)